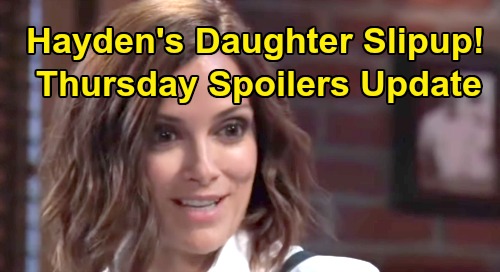 General Hospital (GH) spoilers update for Thursday, August 29, reveal that Hamilton Finn (Michael Easton) will have a serious conversation with Sasha Gilmore (Sofia Mattsson). Based on GH’s latest preview video, there’ll definitely be some deadly concerns. Sasha will ask if Finn’s saying she’s terminal, but he may suggest there’s always hope. The situation will remain dire, but Finn may not be ready to throw in the towel yet.

Meanwhile, Hayden Barnes (Rebecca Budig) will realize Finn and Alexis Davis (Nancy Lee Grahn) dated briefly. She’ll tease Alexis about it at Charlie’s Pub, but Alexis will try to brush the whole thing under the rug. General Hospital spoilers say Alexis day will get even more humiliating when Neil Byrne (Joe Flanigan) appears. She won’t exactly be happy to see him since more embarrassing moments are on the way.

As for Hayden, she’ll get caught looking at a picture her daughter drew – her daughter with Finn! The trouble is Finn will catch Hayden admiring the kid’s artwork. He’ll naturally wonder where it came from, so Hayden will lie about Aiden Webber (Jason David) giving it to her.

Talk will turn to Alexis soon after. General Hospital spoilers say Hayden will enjoy joking around with Finn about it, but Robert Scorpio (Tristan Rogers) will spot their encounter. He’ll think Hayden and Finn are looking a little too cozy for his taste. It won’t be long until Robert confronts Finn and reminds him that Anna Devane (Finola Hughes) is his fiancée.

Over with Jasper “Jax” Jacks (Ingo Rademacher), he’ll end up in a predicament that requires a graceful exit. Jax is a pro at that sort of thing, so it’ll be easy for him to turn on the Aussie charm and slide right out. Next, let’s discuss Curtis Ashford (Donnell Turner) and one incredible offer. Valentin Cassadine (James Patrick Stuart) will insist $5 million is on the table if Curtis can track down Cassandra Pierce (Jessica Tuck).

Jordan Ashford (Briana Nicole Henry) racked up some serious medical bills during her kidney crisis. That kind of money could change everything for Curtis and Jordan, but it’d mean taking some huge risks. While Curtis mulls it over, T.J. Ashford (Tajh Bellow) will get some surprising news. He’ll learn Curtis has another job besides working for Aurora Media, so he’ll grow curious about what it is.

T.J. may fret about Curtis if he learns Valentin is also his boss. However, it’s the kind of job that pays big and T.J. may have to acknowledge that. At the police station, Robert will discuss the Cassandra case with Michael Corinthos (Chad Duell). He’ll talk about the best lead they’ve received so far and hope it pans out. They don’t want Cassandra spreading the avian flu or wreaking any other kind of havoc.