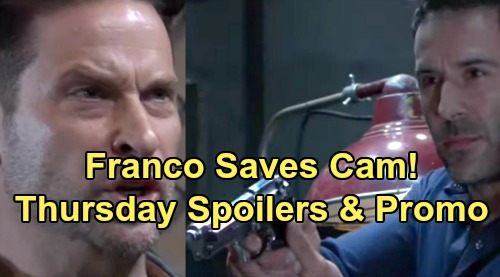 General Hospital (GH) spoilers for Thursday, August 8, tease that Hamilton Finn (Michael Easton) will be consulted about a case at GH. Lucas Jones (Ryan Carnes) will think he could use Finn’s expertise, so he’ll summon the doc and hope for the best. Finn will be glad Lucas brought him in on this. He’ll suggest it’s not looking good, so he’ll probably be talking about Sasha Gilmore’s (Sofia Mattsson) mysterious illness.

Sasha just lost consciousness, which means she’ll be rushed to GH for treatment. That’ll leave Finn and his team to determine what’s wrong with her, but that may not be an easy task. Whatever Cassandra Pierce (Jessica Tuck) injected that grapefruit with is likely lethal and difficult to detect.

However, Nina Reeves (Cynthia Watros) will hold out hope for Sasha. She’ll beg Finn and the rest of the staff to help her daughter, but GH fans know Sasha isn’t her daughter at all. Could that shocker come out thanks to all the testing that’ll inevitably be done? Time will tell, but Valentin Cassadine (James Patrick Stuart) will grow concerned for several reasons.

Meanwhile, Michael Corinthos (Chad Duell) will hear about Sasha’s sudden crisis. He’ll be distraught to learn Sasha’s in such bad shape and immediately wonder what might’ve caused this. Finn may have some questions for Michael about what happened on their island getaway. Sasha noticed her grapefruit was a tad bitter, but that may not be significant enough for Michael to remember it – at least not yet.

Of course, there might be some mention of “Sandy Lance” aka Cassandra and a description at some point. Cassandra also took a selfie with Michael and Sasha that she might send to taunt Nina. Regardless, Sasha’s condition should rapidly decline without some sort of antidote or miracle cure.

Thankfully, that hasn’t happened yet, so Franco still has a chance to save Cam. Chelsea Lambas (Jen Ray) gave Franco an updated reading that gives us a clue about what’s next. She suggested Franco would face an incredibly easy decision followed by a far tougher one. The easy part should be taking Cameron’s place; the tough part may be losing all his memories of Elizabeth Baldwin (Rebecca Herbst) and the boys.

Nevertheless, Franco will be determined to protect Cameron and the rest of the family if Shiloh threatens them. He’ll be held at gunpoint, so there’s plenty of danger looming. Over with Liz, she’ll begin to truly worry about Cam. Her son didn’t show up when he was supposed to meet, so she’ll get some help from Jason Morgan (Steve Burton) on Thursday.

Next, Drew will trace Dr. Cabot’s phone and suggest Curtis Ashford (Donnell Turner) won’t believe who the doc’s been calling in Port Charles. Of course, that’ll be a simple guess for Curtis. They know this all goes back to Shiloh, so they’ll confirm he’s teamed up with the memory mastermind. Curtis and Drew should be their on way to Franco’s location soon, but it looks like they’ll be too late!