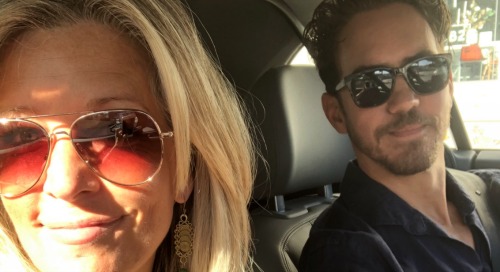 General Hospital (GH) spoilers reveal that one ABC soap star recently shared some big news with fans. GH viewers know Wes Ramsey as Peter August in Port Charles, but he also plays the role of Daniel in a film that’s now available to everyone at home. Perception is a psychological thriller you can purchase from iTunes, Amazon and Video on Demand.

The film also starts Meera Rohit Kumbhani as Nina, a mysterious psychic who’s struggling to get by with her young son. Ramsey’s Daniel is a real estate developer who has to evict Nina, but things take an intriguing and suspenseful turn when she offers up a free psychic reading. Nina quickly senses a familiar spirit as Daniel’s dead wife seemingly reaches out.

As a result, Daniel develops an intense obsession. Memories of his deceased spouse flood back and leave him truly haunted. As he struggles to cope, Daniel becomes determined to communicate with her and try to reunite in some way. Nina is pulled into all this through her psychic abilities. Like Daniel, she has to figure what she wants and how far she’ll go to get it.

This thriller comes with plenty of supernatural twists and turns, so it sounds like an exciting mind-bender flick. Ramsey filmed this movie a couple years back, but it’s just now becoming widely available. General Hospital fans may want to check it out – Laura Wright, Ramsey’s real-life love, is certainly hoping you do! She posted a sweet message in support of Ramsey’s project on Twitter.

Wright tweeted, “Sooo good !!!! And super sexy !!!!” She’s always Ramsey’s biggest fan and cheerleader, so it’s great to see her spreading the word for her beau. As for what’s next in Port Charles, General Hospital spoilers say Peter and Maxie Jones’ (Kirsten Storms) romance will continue to develop. Will they keep heading in a positive direction? It seems that way for now, but trouble’s usually just around the corner on soaps!

GH viewers won’t want to miss the ups and downs ahead. We’ll give you updates as other details emerge. Stay tuned to the ABC soap and don’t forget to check CDL often for the latest General Hospital spoilers, updates and news.