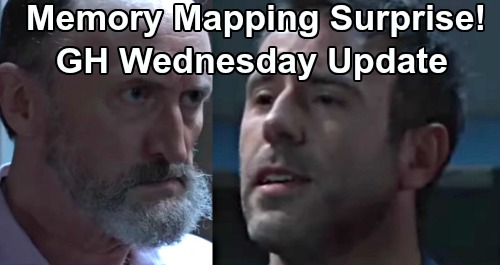 General Hospital (GH) spoilers update for Wednesday, August 7, tease that Shiloh Archer (Coby Ryan McLaughlin) will be feeling desperate. His plan to capture Jason Morgan (Steve Burton) and map Drew Cain’s (Billy Miller) memories into his brain has just gone up in smoke. As GH viewers know, Jason pummeled Shiloh and ended up rescuing Sam McCall (Kelly Monaco) from that freezer in front of the Dawn of Day house.

That means that Shiloh’s big plan to simultaneously get the location of his cash from Drew’s memory and neutralize Jason is a bust. And Shiloh’s got to know that he’s in serious jeopardy now. After all, he messed with Sam again and nearly killed her this time, and there’s no way that Jason or Sonny Corinthos (Maurice Benard) is going to let it go. Shiloh’s got a target on his back now.

So, in his desperation, Shiloh has apparently overpowered and abducted Cameron Webber (William Lipton). Wednesday’s GH previews show Shiloh in some dark room with Dr. Arthur Cabot (Time Winters), presenting him with a subject, who’s most surely going to be Cameron. We’ll see if Dr. Cabot actually agrees to trying the memory mapping on Cameron – after all, Cameron is not only not a twin of Drew’s, but he’s a teenager.

Then again, Dr. Cabot seems to enjoy working outside the bounds of ethics, so he might agree to go ahead with Cameron as a subject. But since GH spoilers indicate that Franco Baldwin (Roger Howarth) will soon be involved in this mess, it looks like he might end up switching places with Cameron in order to save his stepson. GH viewers will have to tune in to see how it all goes down.

Meanwhile, on the new episode of General Hospital on Wednesday, August 7, Ava Jerome (Maura West) will have another meeting with her new psychic, Chelsea Lam (Jen Ray). Chelsea will tell Ava that she needs to make amends first if she wants to reach Kiki Jerome (Hayley Erin). But who will Chelsea want Ava to make amends with?

Ava’s already tried to tell Kiki’s spirit that she’s sorry for the things she’s done and the way she treated her, so perhaps Chelsea means that Ava needs to make amends with all of the other people she’s hurt in her life. That would be a tall order since we’re talking about Ava here, but perhaps if Ava makes a good faith effort to make amends with those she can, that will do the trick.

GH buzz says that this amends angle is going to lead somewhere very interesting. Remember that Ava previously tried to contact Nikolas Cassadine (last played by Nick Stabile) when she was working with psychic Sibley Gamble (Veronica Cartwright) – might she try that again with Chelsea, in order to try to make amends?

If so, and Chelsea is also unable to reach Nikolas from the great beyond, then that could lead Ava to ask some interesting questions going forward. We’ll see where it all leads but General Hospital spoilers are giving lots of hints that Nikolas is indeed alive!