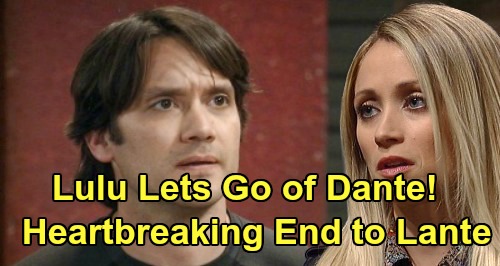 General Hospital spoilers reveal that Lulu Falconeri (Emme Rylan) will continue to struggle. She’s had a hard time wrapping her head around Dante Falconeri’s (Dominic Zamprogna) rejection and what that means for her life. GH viewers will recall that Lulu received divorce papers, so she needs to decide whether she’s going to fight for her marriage or sign the papers like Dante wants.

Of course, things are tricky due to Dante’s situation and the fact that he’s not even in Port Charles right now. Laura Collins (Genie Francis) will reassure Lulu that she can move past this rejection and find a way forward. She’ll keep trying to help her daughter see that there’s light at the end of this tunnel. Still, it’ll be difficult for Lulu to truly let go.

As General Hospital watchers know, Dante isn’t rejecting Lulu because he no longer loves her. He simply doesn’t think it’s safe to be around Lulu and their children. Dante’s basically trying to force Lulu to move on through this divorce. He doesn’t want her waiting in limbo for a day that may never come. There are no guarantees that Dante will ever be well enough to come home to his family.

In Dante’s mind, he’s divorcing Lulu out of love. Dante clearly just wants what’s best for her. However, this feels more like a real rejection to distraught Lulu. It’s difficult for Lulu to accept the finality of this divorce and the last bit of hope it would crush. Signing those divorce papers would mean Lulu is giving up on Dante and the life they could’ve shared together.

Unfortunately, that plan ended in disaster when Dante pumped a bullet in Peter’s shoulder! It’s obvious that Dante is a dangerous man. Safety has to come first, so it’s almost crazy that GH is even turning this into such a huge issue. What if Dante had shot Lulu or one of the kids? He’s not abandoning his family; he’s keeping them alive and well.

Since Dante doesn’t see himself getting better anytime soon, it’s easy to see why he’d push for this divorce. Since Dominic Zamprogna doesn’t want to make a fulltime comeback, it’s the right call for GH, too. Lulu deserves to find love again, even if it’s not with Dante.

General Hospital viewers will recall that Laura initially encouraged Lulu to hang on and fight for her marriage, but her opinion has shifted. Between the incident with Peter and now the divorce papers, Laura’s seen the light about the situation. Laura knows Lulu has to move on. Finding her drunken daughter in such bad shape recently drove the point home.

Although this has to be Lulu’s decision, General Hospital spoilers say Laura will try to pull her into the future. Lulu can’t remain stuck in her past “Lante” dreams. GH fans will see Laura offer support as Lulu tries to let go and find a new path for herself.

Will that new path include Dustin Phillips (Mark Lawson) or someone else? Time will tell, but Lulu has to focus on healing her broken heart first. Once Lulu works through her feelings, she can concentrate on filling the lonely void Dante left behind. We’ll give you updates as other GH news comes in. Stay tuned to the ABC soap and don’t forget to check CDL often for the latest General Hospital spoilers, updates and news.