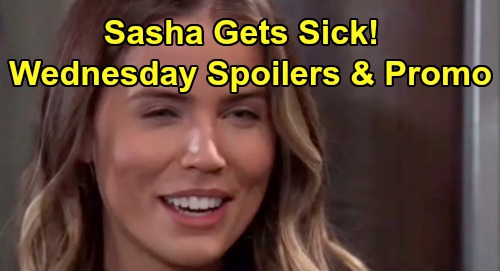 Sasha may confide that the possibilities ahead excite her. She’s found a great man in Michael Corinthos (Chad Duell) and now this could be huge career news. Sasha will think things are looking up, but it should all come crashing down thanks to whatever Cassandra Pierce (Jessica Tuck) injected her grapefruit with. General Hospital spoilers say Sasha will begin to exhibit some strange symptoms that spell trouble on Wednesday’s new GH episode, August 7.

In the meantime, Scott Baldwin (Roger Howarth) will ask Laura Webber (Genie Francis) to do him a favor. Laura will smile at the request, so she should go for whatever Scott has in mind. Over with Nina Reeves (Cynthia Watros) and Valentin Cassadine (James Patrick Stuart), they’ll discuss Jasper “Jax” Jacks (Ingo Rademacher). Valentin will think it’s plain to see that Jax has some sneaky agenda.

Nina will agree Jax is up to something, but she may not feel like it’s as bad as Valentin wants to believe. Of course, Jax is plotting Valentin’s takedown, so it’s pretty darn bad! Valentin can tell he’s dealing with a serious threat here, so he’ll want to be careful.

Other General Hospital spoilers say Hayden Barnes (Rebecca Budig) will fret over her actions at Wyndemere. She’ll hate that she poured her heart out to Hamilton Finn (Michael Easton) and embarrassed herself, but Jax will offer another perspective. He won’t think it’s horrible for Finn to know how Hayden feels, but she’d much rather keep her emotions close to the vest.

Next, Ava Jerome (Maura West) will meet with her psychic again. Sibley Gamble (Veronica Cartwright) couldn’t get the results Ava wanted, so she’s trying her luck with Chelsea Lambas (Jen Ray) now. GH spoilers state that Chelsea will offer more advice on Wednesday. She’ll insist Ava needs to make amends if she wants to reach her daughter, but that’s easier said than done.

Ava has a long list of transgressions and not many people who are willing to accept her apology. She desperately wants Kiki Jerome’s (Hayley Erin) forgiveness, but she’ll continue to face hurdles along the way. Elsewhere, Shiloh Archer (Coby Ryan McLaughlin) will deliver a shocker to Dr. Arthur Cabot (Time Winters). He’ll reveal that he’s found a new subject: Cameron Webber (William Lipton).

Cameron disappeared after stumbling across Shiloh in the park, so it seems obvious Cam’s a desperate last resort. This is undoubtedly how Franco Baldwin (Roger Howarth) will get involved. General Hospital spoilers suggest Franco may end up with Drew Cain’s (Billy Miller) memories, so he’ll likely trade places with his stepson to spare him.

Finally, Sam McCall (Kelly Monaco) will continue to recover after her traumatic ordeal. She’ll be grateful to Jason Morgan (Steve Burton) for saving the day, but she’ll still worry about what Shiloh has in store. She may hear about Cameron’s kidnapping and fear the worst, but Jason will contend that Shiloh’s lost it. He’ll feel like the disgraced cult leader is spinning out of control and has no chance of winning.