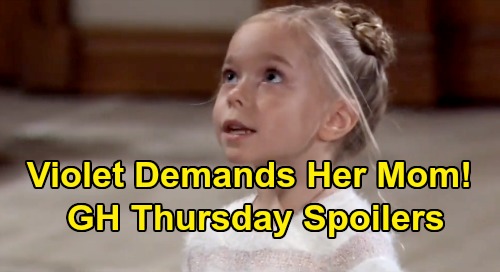 General Hospital (GH) spoilers for Thursday, December 26, tease that Anna Devane (Finola Hughes) will mull over her latest discovery. General Hospital will be showing encore episodes December 24 and 25. Anna recently realized there’s a connection between Peter August (Wes Ramsey) and the gunman Peter killed at GH. Anna mentioned looking into European companies that served as fronts for the DVX – and she later determined that Peter had been at EuroTech at the same time as the gunman.

It looks like Anna will fill Hamilton Finn (Michael Easton) in, so he’ll wonder what she’s going to do now that she knows. They’ll disagree about Anna’s next move, but it’ll just be a minor holiday hiccup for the couple. General Hospital spoilers say their argument won’t last long, but Anna will still have to figure out how to handle this tricky situation with Peter.

Meanwhile, Maxie Jones (Kirsten Storms) will unknowingly give Peter a warning. She’ll insist Jason Morgan (Steve Burton) won’t rest until he knows who this bad guy is. Peter may worry about Jason uncovering proof that could sink him soon enough. Could Peter try to eliminate Jason if he digs too deep? That’s certainly a concern since Peter has given some lethal orders to cover up his secrets.

Over with Finn again, he’ll face a difficult question from Violet Barnes (Jophielle Love). She’ll ask if Mommy’s going to be back in time for Christmas, so Finn will have to break some bad news. General Hospital spoilers say Finn will admit Hayden Barnes (Rebecca Budig) won’t be in town for the holidays. However, he’ll undoubtedly reassure Violet that she’ll have plenty of love, support and presents this year.

Of course, we should point out that GH is airing this episode out of order. The recent preemptions threw off the schedule, so they wanted to go ahead and air their standalone holiday special on Monday. It won’t affect the stories too much, but that’s why we’re going back to some action that happened before all the Scrooge fun.

Nelle Benson (Chloe Lanier) already saw “Wiley Cooper-Jones” (Erik and Theo Olson) at GH and gushed over what a beautiful little boy he is. Willow Tait (Katelyn MacMullen) will still have him in her arms on Thursday when Nelle asks to hold him. Naturally, Willow will look a bit suspicious. She won’t know who Nelle is at first, but she will before long. Michael Corinthos (Chad Duell) and Brad Cooper (Parry Shen) will probably come rushing over to make sure Nelle backs off.

Other General Hospital spoilers say Julian Jerome (William deVry) will have a chat with Brook Lynn Ashton (Amanda Setton). Julian will talk about what would be the best gift of all – which would surely be Lucas Jones (Ryan Carnes) waking up. It may not happen just yet, but at least Brook Lynn can offer Julian some kind words and a sympathetic ear.

At Turning Woods, Mike Corbin (Max Gail) will have a major meltdown. Thursday’s preview video shows Mike shouting, “They took her! They took my wife!” It’s not clear if Mike means Yvonne Godfrey (Janet Hubert) or if he’s just confused about the past, but he’ll be quite upset either way. Sonny Corinthos (Maurice Benard) and Carly Corinthos (Laura Wright) will have to calm Mike down and hope to salvage the holiday.