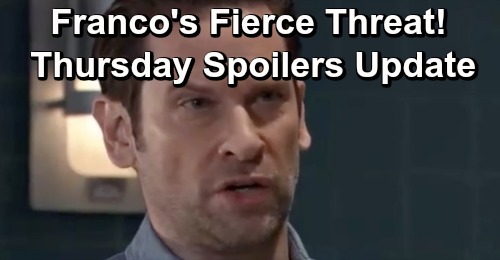 General Hospital (GH) spoilers for Thursday, February 7, tease that Franco Baldwin (Roger Howarth) will be fed up with all the accusations. He knows he never attacked Lulu Falconeri (Emme Rylan), but she claims he did due to that devious hypnosis session. “Dr. Kevin Collins” aka Ryan Chamberlain (Jon Lindstrom) made sure Franco looked guilty, so the reformed killer is in hot water.

On Thursday, Franco will swear to Jordan Ashford (Briana Nicole Henry) that he’s innocent. He’ll insist that he didn’t kill Kiki Jerome (Hayley Erin) or any of the other recent victims. Of course, Jordan won’t budge and that’ll leave Franco fuming. He’ll threaten to sue and vow to own Port Charles when this is all over.

Meanwhile, Elizabeth Webber (Rebecca Herbst) will get Scott Baldwin (Kin Shriner) on the phone and send him to the police station right away. She’ll be deeply distraught over Franco’s arrest, but she’ll try to stay calm and focus on helping him. Liz will realize she has to fight for Franco and their love, so those claws will keep coming out!

Other General Hospital spoilers say Ava Jerome (Maura West) will hit the roof. She’ll rant to “Kevin” about the killer, so it sounds like she’ll get updates on Franco’s arrest. Ava’s fury will erupt as she seeks justice for her daughter. Part of her won’t want to believe Franco’s capable of this, but the part that wants Kiki’s murderer to pay should win out.

Over with Margaux Dawson (Elizabeth Hendrickson), she’ll talk to Sonny Corinthos (Maurice Benard) about the charges against Franco. Sonny will contend that Franco can’t get away with his actions again. He’ll feel like Franco is an evil psycho who needs to be locked up, so Margaux may promise to make it happen.

The good news is Franco’s innocence will ultimately be proven. The bad news is Franco’s mess will get messier before he walks free. Liz will just have to put her trust in Franco and show support however she can. Oscar Nero (Garren Stitt) will also find himself in need of support on Thursday. General Hospital spoilers say Dr. Terry Randolph (Cassandra James) will have some test results to pass along.

Drew Cain (Billy Miller) and Dr. Kim Nero (Tamara Braun) will be there for Oscar every step of the way. It’s possible Oscar’s results will bring a hint of positivity. He’s dying no matter what, but more time would certainly be a good thing. Nevertheless, Oscar probably knows by now to prepare for the worst. His prognosis will remain grim, so he’ll need to rely on his loved ones in the coming weeks.

Finally, General Hospital spoilers say Julian Jerome (William deVry) will bring Josslyn Jacks (Eden McCoy) up to speed. He’ll note that her plan to push Drew and Kim together was a flop. Julian tried to step aside for the former flames, but he loves Kim too much to walk away. He’ll suggest that Joss had better accept that and back off, but that doesn’t mean she’ll be happy about it.

General Hospital fans won’t want to miss all the excitement on Thursday. We’ll keep you posted as other GH details emerge. Stick with the ABC soap and don’t forget to check CDL often for the latest General Hospital spoilers, updates and news.