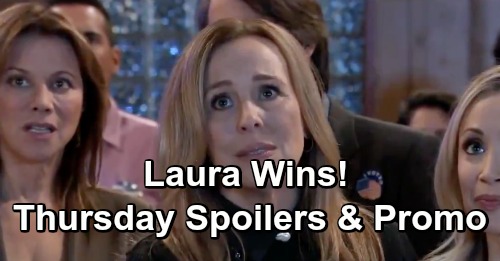 General Hospital (GH) spoilers for Thursday, January 10, tease that Dr. Hamilton Finn (Michael Easton) will catch up with Alexis Davis (Nancy Lee Grahn). These two were once on the verge of a romance, but Finn’s feelings for Anna Devane (Finola Hughes) got in the way. Alexis quickly made peace with that, so she’ll talk to Finn about his relationship with Anna and hope things are going well.

Finn will admit they’re in a good place. Nothing would make him happier than to spend the rest of his days loving Anna, so he’ll do his best not to rock the boat. Unfortunately, life will have other plans! Some obstacles are indeed looming for Anna and Finn, so they’ll have to ride the waves together.

In the meantime, Anna will get another opportunity of some sort. Perhaps she’ll be able to chat with Peter August (Wes Ramsey) again and make a little more progress in their relationship. Lulu Falconeri (Emme Rylan) will want to speak with Peter on Thursday, too. She’ll fill him in on her recent conversation with Margaux Dawson (Elizabeth Hendrickson) and they’ll ponder the murder mystery.

Lulu will suggest that there’s some puzzle piece she hasn’t found. She’ll plan to keep digging for the truth, but Peter will wonder if that’s a good idea. He’ll ask what Lulu’s going to do if she finds this missing link. Lulu may argue that she intends to report on it, but Peter might contend that her safety has to be the priority. He won’t want Lulu making herself the serial killer’s target.

Speaking of the serial killer, Ryan Chamberlain (Jon Lindstrom) will get the inside scoop from Mac Scorpio (John J. York) in Thursday’s new GH episode, January 10. Mac will tell “Dr. Kevin Collins” that he has to tell him something, but it needs to stay between them. Of course, he won’t realize he’s about to give away major clues to the murderer himself.

Mac will likely mention the driver’s license connection and the copycat suspicions. That could convince Ryan to get more creative or just keep going knowing that the cops are on the wrong track. Either way, Ryan will remain confident in his abilities. He feels untouchable, so he’ll keep taunting the PCPD in the coming weeks.

Other General Hospital spoilers say the election results will finally be revealed. Port Charles’ latest mayor is about to be declared, so excitement will build all over town. The winner is…Laura Collins (Genie Francis)! She’ll gladly accept her shot at leading the people and sparking some beneficial changes in the community.

Finally, we’ll see a strange encounter down by the docks. Shiloh Archer (Coby Ryan McLaughlin) will bump into Sam McCall (Kelly Monaco) and Jason Morgan (Steve Burton), so he’ll ask for their help with something. Jason and Sam will naturally look uneasy. They don’t trust this guy at all, so whatever favor Shiloh asks will be met with wariness.

General Hospital fans won’t want to miss the exciting scenes ahead. We’ll give you updates as other GH news comes in. Stick with the ABC soap and don’t forget to check CDL often for the latest General Hospital spoilers, updates and news.