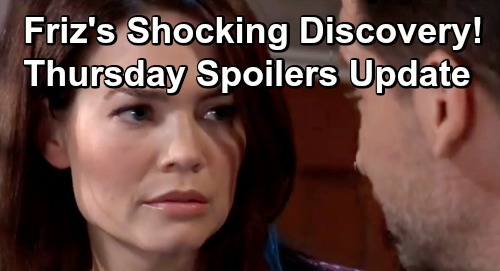 General Hospital (GH) spoilers update for Thursday, July 18, tease that Franco Baldwin (Roger Howarth) and Elizabeth Baldwin (Rebecca Herbst) will realize that they’ve discovered something significant. As GH viewers know, they’ve just noticed something strange about one of the photographs that was taken during their wedding celebration on The Haunted Star. One of the photos shows Franco with an inebriated Liesl Obrecht (Kathleen Gati), but there’s also a shadowy figure in the background!

Of course, Elizabeth and Franco were just joking about Liesl’s claim that she was pushed overboard that night. They were under the assumption that Liesl simply tripped in her drunken state and fell. But Liesl has insisted all along that she was deliberately pushed by someone, and although she’s impulsively pointed the finger at Hayden Barnes (Rebecca Budig), she really doesn’t know who it was.

Well, now that this photograph has surfaced, perhaps the authorities can analyze it and try to get to the bottom of who might have tried to kill Liesl. And that leads to an interesting question…just who was it who pushed her?

Right now, it’s looking like it was either Valentin Cassadine (James Patrick Stuart) or Brad Cooper (Parry Shen). Each of them has reason to want to quiet Liesl, since she knows secrets that would destroy them if she spilled the beans.

Of course, since Brad was recently shown possibly trying to give Liesl some sort of injection at the hospital, General Hospital spoilers say he’s probably the most likely candidate for being the pusher. Brad simply wants to keep custody of Wiley Cooper-Jones, and he’s afraid that Liesl knows too much about the situation. Does Brad wish further harm to Liesl? GH viewers will have to wait and see!

Meanwhile, on the new episode of General Hospital on Thursday, July 18, Nina Reeves (Cynthia Watros) will start to have a change of heart, or so it seems.

As GH viewers know, she’s just found out that Willow Tait (Katelyn MacMullen) was involved in DOD and a victim of Shiloh Archer’s (Coby Ryan McLaughlin). And after she read all about Shiloh’s claims about the child that Willow gave up for adoption, she put two and two together.

Specifically, Nina recalled her behavior toward Willow at the General Hospital Nurses’ Ball, when she made a big scene after overhearing that Willow had given up a baby for adoption. On Thursday’s episode, Nina will realize that Shiloh may have first learned about Willow’ baby because of her, and she’ll feel terrible.

It will be an interesting situation, since this will be the first time that Nina has felt or showed any compassion for Willow. Will she try to seek out Willow and offer an apology? And would Willow even accept an apology at this point? After all, Nina has treated her pretty badly in the past, in more ways than one.

Of course, an interesting wrinkle in this whole scenario is that there’s the very real possibility that Willow is Nina’s long-lost daughter. Right now, Nina and everyone else think that Sasha Gilmore (Sofia Mattsson) is her daughter, but GH viewers know that’s not the case. GH buzz is

that Willow is Nina’s daughter, and who knows – if Nina makes an apology to Willow and Willow accepts, then this could be the beginning of a better relationship for the two.