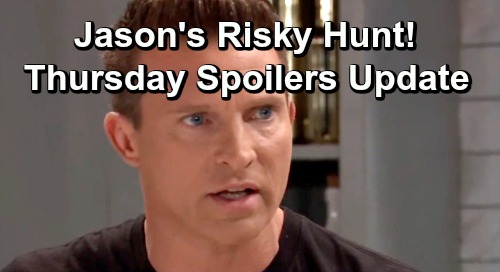 General Hospital (GH) spoilers update for Thursday, June 20, tease that Sonny Corinthos (Maurice Benard) will try to get to the bottom of Dev’s (Ashton Arbab) arrival. When Dev beats around the bush, Sonny will rev up the pressure. He’ll order Dev to tell him why he’s in Port Charles, so the teen will have to start talking soon. Dev should have a surprising reason for showing up out of the blue like this.

Meanwhile, Franco Baldwin (Roger Howarth) will check on Drew Cain (Billy Miller). He’ll wonder how Drew’s coping with Oscar Nero Quartermaine’s (Garren Stitt) death, so Drew will suggest he’s hanging in there. It’s Kim Nero (Tamara Braun) that everyone needs to worry about. Drew will confess that Kim isn’t doing very well. He’ll share his concerns with Franco and get some much-needed support.

Elsewhere, General Hospital spoilers say Kim will come clean to Elizabeth Baldwin (Rebecca Herbst). After Liz offers her condolences, Kim will talk about her mental state lately. She’ll admit she’d like to have a baby, so she asked Julian Jerome (William deVry) to have one with her.

Liz should be glad Julian knew how to handle the situation. She may assure Kim that Julian’s right; this is a topic that should be revisited once she’s moved on. Unfortunately, Kim just won’t know how to do that. She’s stuck in mourning, so a baby feels like her only way out of this pit of despair.

At GH, Neil Byrne (Joe Flanigan) will stop by for a therapy session with Kevin Collins (Jon Lindstrom). Even therapists need to open up sometimes! Neil will talk to Kevin about the feelings he’s developed for a patient. Naturally, that patient must be Alexis Davis (Nancy Lee Grahn). Neil is obviously falling hard and struggling to figure out what to do.

Of course, the answer seems pretty simple: either ditch Alexis as a patient and ask her out or continue the therapy and keep pining. This isn’t complicated, but Neil will still need someone like Kevin to spell it out for him. While Neil considers his options, Alexis will speak with Diane Miller (Carolyn Hennesy). They’ll have a meeting of the minds as they fear Shiloh Archer’s (Coby Ryan McLaughlin) next move.

Diane will ask if Alexis has done any digging and hope for something juicy. She’s trying to prepare for court, but she could really use a bomb to drop on Shiloh. Alas, it appears Willow Tait’s (Katelyn MacMullen) secret shocker could do the most damage. She just confessed to killing her father, so Michael Corinthos (Chad Duell) will hear the whole ugly story on Thursday.

It seems likely that Shiloh was the real culprit. He probably just manipulated Willow into doing things she didn’t want to do. Harmony Miller (Inga Cadranel) was undoubtedly part of all this as well. Willow will admit she had to choose between her dad and DoD, but she clearly made the wrong decision. Shiloh may plan to use this deadly drama to his advantage soon enough.

Other General Hospital spoilers say Carly Corinthos (Laura Wright) will fret over Jason Morgan’s (Steve Burton) plan. She’ll remain worried about the trouble that awaits in Beechers Corners, but Jason will insist on finding proof against Shiloh. If it’s out there, Jason will want to track it down.

It looks like Jason will indeed land in a tight spot next week, June 24-28, so Carly’s concerns are warranted! We’ll give you updates as other GH news comes in. Stick with the ABC soap and don’t forget to check CDL often for the latest General Hospital spoilers, updates and news.