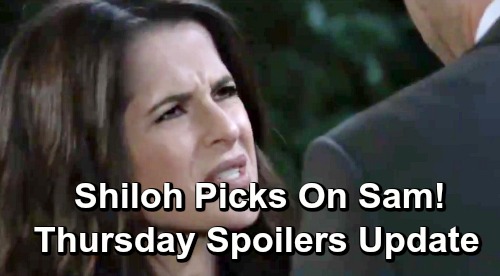 General Hospital (GH) spoilers update for Thursday, June 27, tease that Kim Nero (Tamara Braun) will be an emotional wreck as she keeps pleading for a baby. She’s desperate to have Drew Cain’s (Billy Miller) kid and just pointed out they don’t have to be together to have one. Kim would be fine with doing this in a hospital setting. She just really wants a little brother or sister for Oscar Nero Quartermaine (Garren Stitt).

However, Drew isn’t interested in using any method to get Kim pregnant. The last thing she needs to be doing right now is having another baby. Kim needs to process her grief over Oscar’s passing first, so Drew will insist he can’t do this. Kim will have to find another way to move on.

Unfortunately, she’ll pick a dangerous path when she decides to give Shiloh Archer (Coby Ryan McLaughlin) a call. General Hospital spoilers say Kim will make this awful choice on Thursday, which will set up Shiloh’s arrival by the end of the week. Kim’s determined to have a baby, so she’ll hope Shiloh can make this happen for her.

Until then, Officer Billy Price (Jonathan Stanley) will continue his phone conversation with Shiloh. He may end up talking to someone else as well. Whatever the case, Billy will suggest he can’t promise this will be painless. He’ll glare at Jason Morgan (Steve Burton) in his cell and plan to rev up his misery.

Shiloh will take great pleasure in Jason’s predicament, so he’ll likely let Sam McCall (Kelly Monaco) know he’s running the show. GH fans know the police do almost anything Shiloh wants in Beechers Corners. Sam will fume as Shiloh gloats in Thursday’s episode. She’ll argue that Shiloh is going down – perhaps when he least expects it. Shiloh should definitely prepare for a day of reckoning eventually.

Of course, that would set a DNA test in motion, which is exactly what Brad and Julian don’t want. Alexis won’t understand why Julian’s so intent on sabotaging Lucas and Brad. Coming forward wouldn’t guarantee that the judge will side with them, but it’d give them a far better shot in court. At least it would if Brad and Lucas still had the baby they started out with!

The baby swap is the real problem here, so will Julian let Alexis in on the secret. General Hospital spoilers state that Alexis will explode at Julian on Thursday. Maybe Julian will blurt out the truth as he knows it. Brad told Julian he swapped dead Wiley for an unknown woman’s child. Julian doesn’t realize that woman was actually Nelle Benson (Chloe Lanier) and the child was Jonah Corinthos.

Nevertheless, the swap alone could cause major trouble and would be enough to make Alexis unleash her fury. Over with Bobbie Spencer (Jacklyn Zeman), she’ll have a lot on her plate. She received a type 2 diabetes diagnosis, which is adding to her stress level. The Shiloh-Wiley drama is the top concern though since an innocent baby is at risk.

Bobbie will briefly talk to Epiphany Johnson (Sonya Eddy) about her family crisis. She’ll be caught off guard when Epiphany insists Bobbie should come with her. Will there be some GH catastrophe that only Bobbie can handle? Regardless, Bobbie will rush over to see what the big emergency is.

Back with Sam, she’ll pitch in with something for Lucas’ sake. If it helps him keep “Wiley,” Sam will be more than willing to lend a hand. As for Jason in Beechers Corners, Michael Corinthos (Chad Duell) will be a rescue ranger. He’ll find a surprising solution to Jason’s current legal dilemma.