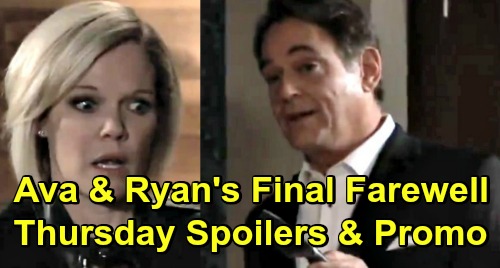 General Hospital (GH) spoilers for Thursday, May 23, tease that Jordan Ashford (Briana Nicole Henry) will be in V-tach. At GH, Curtis Ashford (Donnell Turner) will stay right by Jordan’s side. She’ll die once she slips into V-fib if her doctors don’t act fast, but they’ll get the situation under control for now. However, Jordan clearly needs a new kidney or else she’s not going to survive.

Fortunately, one could become available soon if Ava Jerome (Maura West) has anything to say about it. She just lured Ryan Chamberlain (Jon Lindstrom) to a secluded location, so he’ll pop out and give her a scare on Thursday. Ava will look shaken up as Ryan holds a knife and inches closer. He’ll suggest Ava has no idea how much he’s missed her.

Will Ava pretend to give Ryan the reunion he wants? That might be her best shot at not only surviving this encounter but taking Ryan down. Perhaps Ava will eventually get the upper hand and plunge that knife herself!

In the ballroom, Lucy Coe (Lynn Herring), Mac Scorpio (John J. York) and Felicia Scorpio (Kristina Wagner) will rush to Dr. Kevin Collins’ (Jon Lindstrom) aid. Ryan knocked Kevin out, put him in a straitjacket and strung him up above the stage. Kevin will still be unconscious once he’s brought down to the floor. That’ll leave Felicia and Lucy to tend to Kevin and urge him to hang in there.

Meanwhile, Laura Webber (Genie Francis) will unleash her wrath. She’ll chew Margaux Dawson (Elizabeth Hendrickson) for shutting down the investigation and leaving Ryan on the loose. Laura will snarl that a woman is dead because of Margaux. Of course, she’ll be talking about Ryan’s forced accomplice in Canada. Laura will want Margaux to at least feel some guilt for leaving that poor woman vulnerable.

Other General Hospital spoilers say Lucas Jones (Ryan Carnes) will connect even more dots. He just realized Wiley Cooper-Jones is the son of Willow Tait (Katelyn MacMullen) and Shiloh Archer (Coby Ryan McLaughlin). As Lucas works to convince Brad Cooper (Parry Shen) of that, it looks like he’ll figure out Brad already knew about Willow’s link and has connected the dots, too.

GH fans can expect some explosive scenes as Lucas lashes out. However, he won’t realize that Shiloh and Willow’s child actually died the night he came home from the hospital. Wiley was swapped with Jonah Corinthos, so that’ll be another secret Brad has to keep.

Over with Willow, Michael Corinthos (Chad Duell) will be beside her she fills Harrison Chase (Josh Swickard) in. She’ll admit Shiloh knows about the baby, so they’ll worry about the storm that’s brewing.

Next, Sam McCall (Kelly Monaco) will go for take two of her initiation. As Shiloh begins the sex portion of the ceremony, Jason Morgan (Steve Burton) and Sonny Corinthos (Maurice Benard) will listen in.