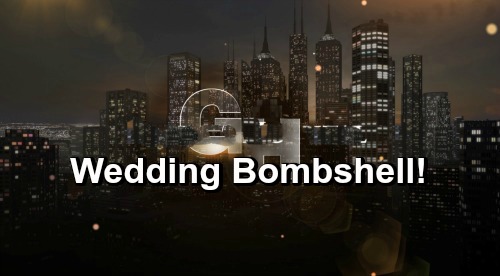 General Hospital (GH) spoilers tease that the calm before the storm has arrived for one couple. After plenty of ring mishaps and confusion, Dr. Hamilton Finn (Michael Easton) finally accomplished his goal. He asked Anna Devane (Finola Hughes) to marry him and she happily accepted. The newly engaged couple headed off to celebrate in a suite, so they’re clearly on cloud nine right now.

After Finn’s very public proposal, Elizabeth Webber (Rebecca Herbst) pointed out how excited she was for them. She’s especially glad Finn has found happiness again after everything that happened with Hayden Barnes (Rebecca Budig). It’s significant that Liz made this comment since she’ll be caught in the chaos of Hayden’s GH return, too.

If Hayden wants Finn back as we expect she might, will Liz side with Anna over her sister? Liz may worry about Finn getting burned again. She could easily remain a “Fanna” supporter after Hayden shows up. Then again, Liz and Franco Baldwin (Roger Howarth) have worked through their fair share of issues. When it’s meant to be, it’s meant to be – and Liz may come to root for Hayden and Finn in time.

Regardless, there’s a good chance we know where this is going. Now that Finn and Anna are engaged, planning a wedding is the next step. They know what they want, so why not get the ball rolling on this quickly. General Hospital has the perfect opportunity for some soapy interrupted nuptials.

Will Hayden destroy Finn and Hayden’s wedding? Will she show up with Finn’s kid on her hip and derail the blissful couple’s big day? Daytime dramas love to mess with pairings just as they’re about to tie the knot. Finn would certainly have a lot to think about if Hayden chose that exact moment to arrive, so the wedding would inevitably be called off or at least postponed.

General Hospital spoilers say Finn will be overwhelmed thanks to Hayden’s comeback and their secret child. He’ll naturally be upset that he was kept in the dark on his son or daughter, but Hayden will do her best to explain and settle Finn down. Finn may reach a place of forgiveness eventually, but will he fall in love again as well? It should be interesting to see who Finn chooses in the end!

Are you rooting for Hayden to win Finn over? Would you rather see Finn stick with Anna instead? We’ll give you updates as other GH news comes in. Stay tuned to the ABC soap and don’t forget to check CDL often for the latest General Hospital spoilers, updates and news.