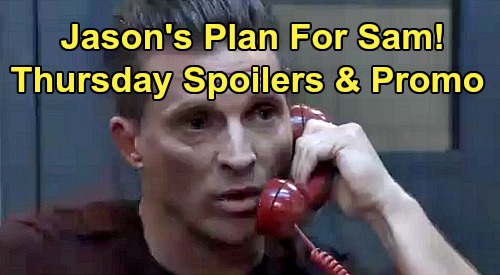 General Hospital (GH) spoilers for Thursday, October 17, tease that Lucas Jones (Ryan Carnes) will remain concerned about Brad Cooper (Parry Shen). He’ll be convinced Brad’s keeping secrets, so he’ll decide to call him out. Lucas will push Brad to reveal what else he’s hiding, but Brad obviously won’t be willing to do that. Telling the truth about “Wiley Cooper-Jones” (Theo and Erik Olson) would blow up his family, so he’ll keep his mouth shut and hope for the best.

Over with Cameron Webber (William Lipton), he’ll be looking for a way to help his mom. Elizabeth Webber (Rebecca Herbst) will be distraught as they prepare for Franco Baldwin’s (Roger Howarth) day in court. She’ll worry things aren’t going to pan out like she wants, but Scott Baldwin (Kin Shriner) will promise to fight with everything he’s got. Even so, Cam will have a different strategy in mind.

On Thursday, Cameron will reach out to Kim Nero (Tamara Braun). He’ll want to make a passionate pitch and hopefully convince Kim to join their side. Cameron may talk about how much the “Friz” fam misses Franco and push Kim to see that she’s wrong. Franco isn’t “Drew Cain” and he never will be – at least not according to his DNA. Cameron will just want Franco to have a shot at coming back to them, but Kim obviously isn’t going to budge on this.

At some point, Kim will share a tender moment with “Drew.” She’ll contend that Drew Cain (Billy Miller) never dies, but we know the real one has been presumed dead in a plane crash. Kim’s only setting herself up for heartbreak here, but she’ll refuse to give up on “Drew” and their future.

At the Metro Court, Kevin Collins (Jon Lindtrom) will talk to Laura Webber (Genie Francis) about this tricky case. He’s been tasked with proving whether or not Franco’s in his right mind, so Kevin will fill Laura in and worry about the road ahead. He’ll know someone’s bound to get hurt no matter what.

GH spoilers say Laura will get in touch with Ava Jerome (Maura West) later. She’ll have concerns about how Ava’s holding up after all the Ryan Chamberlain (Jon Lindstrom) drama. Unfortunately, Ava has another round of that drama coming up. At Pentonville, Ryan will gaze adoringly at Ava’s Crimson issue, which he’s attached to his cell wall. He’ll gush over his queen and remain determined to reunite.

Back with Ava, General Hospital spoilers say Julian Jerome (William deVry) will fret about his sister. Ava will change the subject and make a joke about the cocktail shaker. She’d much rather drink than discuss Ryan, but she won’t be able to ignore her problem for much longer. Ryan’s plotting something that could spell big trouble soon enough.

Until then, a violent incident will take place at Pentonville. Ryan will apparently try to harm someone – perhaps another inmate who dares to speak ill of Ava or suggest they’ll never be together. Then again, Jason Morgan (Steve Burton) will be there visiting Sam McCall (Kelly Monaco). If Ryan flies into a rage over the man who thwarted him in Niagara Falls, that’d be another path to getting restrained.

Regardless, Ryan will be chained up after he lashes out. He’s coming unhinged over his obsession, which can’t be good news for Ava. As for Jason, he’ll speak with someone through the glass and insist he’s going to give that person a way out. Jason will seem rather cold, so he may be speaking with Bryce Henderson instead of Sam. He might toss some threats around and urge Bryce to save himself by turning Peter August (Wes Ramsey) in.

Sonny Corinthos (Maurice Benard) will also question someone about his or her plan on Thursday. That could be Jason or even Michael Corinthos (Chad Duell), who’s fighting for his own love’s freedom. Michael threatened Valentin Cassadine (James Patrick Stuart) and will have no problem playing hardball if that’s what it takes. He warned that if Sasha Gilmore (Sofia Mattsson) goes down, Valentin’s going with her!