General Hospital Spoilers: Could Laura Collins and Martin Gray Be Brother and Sister? 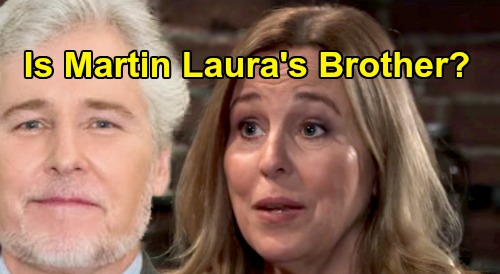 General Hospital (GH) spoilers tease that there may be a connection between Port Charles newcomer Martin Gray (Michael E. Knight) and another long time resident. Laura Collins (Genie Francis) probably won’t think much about it, at least at first, but Laura’s biological father was named Gordon Gray. Gray is fairly common surname, it’s possible there is no connection at all. But on soap operas, it’s pretty likely that if two characters share the same last name, that they are indeed related.

Laura was adopted by the Vining family at a very young age and she and her real mother, Lesley Webber (Denise Alexander) didn’t really connect until Laura was well into her teenage years. Lesley had an affair with married man Gordon Gray. She gave birth but thought the baby had died, but in truth had grown up right there in Port Charles. Gordon reentered Lesley’s life and professed his love to her, but she convinced him to return to his wife.

Little else is known of Gordan Gray

General Hospital spoilers say it’s most certainly possible that Gordon and his wife Florence Gray had a child of their own, or perhaps Gordon had another child with a different mistress or an entirely different relationship. If General Hospital plans to keep Martin around, the best way to do that establish some sort of family ties, so the character has roots in town. By tying Martin in with Laura, he could have a sister that he never met or possibly ever even knew about.

If they do discover that they are siblings

It would certainly be awkward for both Laura and Martin if it true that they are related. Laura has an entire family of her own in town, so that could easily be overwhelming for both of them. But perhaps a little time getting to know each other, and they can form sort of relationship at this late stage. But Michael E. Knight is a very valuable to General Hospital and they would be missing a great opportunity to connect him with Laura in a natural way and give him a reason to stick around in Port Charles for a long time to come.

Do you want to see Martin Gray have relatives already in Port Charles. Could he actually be Laura’s brother? Is this a good way to keep the actor around and involved with a lot of different stories that aren’t just about the cases that he is taking. Right now, he is representing both Nelle Benson (Chloe Benson) and Kim Nero (Tamara Braun) on what many viewers consider to be on the wrong side. When the cases dry up, will Martin just leave Port Charles as quickly as he got here? Keep watching General Hospital weekdays on ABC and check back here for all the news, information, and spoilers.