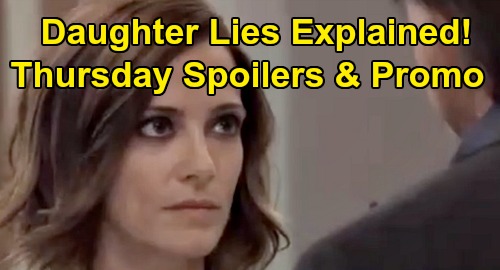 General Hospital (GH) spoilers for Thursday, October 24, tease that Laura Webber (Genie Francis) will meet up with Curtis Ashford (Donnell Turner). They’ll once again discuss the codicil hunt, which they haven’t made much progress on lately. However, Curtis will mention an idea that might help them accomplish their goal.

Over with Josslyn Jacks (Eden McCoy), she’ll receive a gift from her dad. Jasper “Jax” Jacks (Ingo Rademacher) will thrill Joss when he remembers something significant. She’ll open her present and give Jax a big hug, so it’ll be nice to see some father-daughter bonding. Jax and Josslyn definitely have a sweet relationship.

Unfortunately, Hayden Barnes (Rebecca Budig) has robbed Hamilton Finn (Michael Easton) of developing his own father-daughter connection. General Hospital spoilers state that Finn will push Hayden will answers. He just won’t understand why Hayden would keep their little girl a secret, so she’ll have some explaining to do!

Meanwhile, Ava Jerome (Maura West) will take Kevin Collins’ (Jon Lindstrom) advice and get back to the gallery. It looks like Trina Robinson (Sydney Mikayla) will score a job working for Ava, so it’ll be interesting to see how this arrangement pans out. Trina’s got a sassy side like Ava, which could make them a fun duo to watch as they get to know each other.

For now, it seems things will remain mostly professional. Ava will have instructions for Trina, which may have something to do with the painting of Helena Cassadine (Constance Towers) that’ll arrive on Thursday. Of course, Ava will continue to feel unsettled. GH fans know someone’s been spying on Ava, and she can certainly sense this person’s eerie presence. Having Helena’s portrait “haunt” the gallery isn’t going to help!

In the courtroom, Elizabeth Baldwin (Rebecca Herbst) will hope to undo some of Martin Gray’s (Michael E. Knight) damage. He just brought up Liz’s history with Jake Doe and argued the situation with “Drew Cain” aka Franco Baldwin (Roger Howarth) is similar. Martin suggested Liz is trying to deny “Drew” his rights and identity.

Liz will make it crystal clear that the man in front of her is NOT Drew Cain (Billy Miller). This is Franco, even if he can’t remember their love story. Once Monica Quartermaine (Leslie Charleson) takes the stand, she’ll contend that DNA doesn’t define a person. Monica will definitely bolster Martin’s case, so Scott Baldwin (Kin Shriner) will have to use his secret weapon.

Julian Jerome (William deVry) delivered a shocker about Kim Nero (Tamara Braun), which Scott will confront Kim with in court. That could involve drugging the real Drew and trying to force him into bed. Then again, it could be some other bombshell, but the point is Kim will be thrown for a loop – and so will Martin.

Finally, General Hospital spoilers say Dev Cerci (Ashton Arbab) will face questions. He’ll be carrying some boxes upstairs when Sonny Corinthos (Maurice Benard) asks what’s inside. Dev’s doing his best to stay out of trouble, so there’ll probably be a reasonable explanation. Sonny should appreciate Dev’s efforts to pitch in around the house, especially with the new baby in the picture.

It sounds like some great scenes are on the way. We’ll give you updates as other GH news comes in. Stick with the ABC soap and don’t forget to check CDL often for the latest General Hospital spoilers, updates and news.