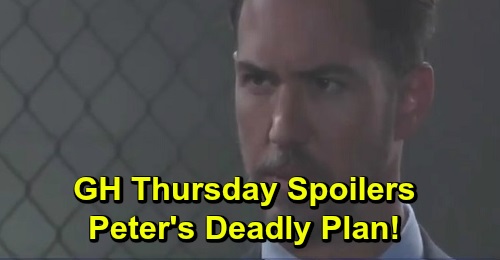 General Hospital (GH) spoilers for Thursday, September 19, tease that Laura Webber (Genie Francis) will be appalled by a sudden arrival. That may be Valentin Cassadine (James Patrick Stuart), who was recently called by Cassandra Pierce (Jessica Tuck). Laura will flash an angry look and wonder what the person in front of her wants.

Of course, what Valentin wants is to eliminate Cassandra as a threat, but she could make that more difficult on Thursday. Will Cassandra blackmail Valentin into helping her? That seems like a good possibility based on Cassandra’s track record. She’s always finding ways to wiggle out of trouble and blow up lives.

At some point, Nina Reeves (Cynthia Watros) will fret over the Cassandra situation to Valentin. She’ll suggest it’s only of matter of time before she winds up in prison. However, Valentin will assure Nina that’s not going to happen. He’ll be determined to keep Nina free and protect their future together, but that’ll be easier said than done.

Meanwhile, Damian Spinelli (Bradford Anderson) will get instructions from Jason Morgan (Steve Burton). Jason will want to know if there’s any connection between Peter August (Wes Ramsey) and Shiloh Archer (Coby Ryan McLaughlin). General Hospital spoilers say Spinelli will accept the challenge and do some digging, so we’ll see what he comes up with.

Elsewhere, Peter’s minion will show off a gun and vow to get the job done. Now that Peter’s decided to eliminate Shiloh, his lackey will contend that Shiloh will soon be nothing more than a bad memory. In the courtroom, GH spoilers say Shiloh will stir up trouble as usual. He’ll speak with Willow Tait (Katelyn MacMullen), who’ll have a supportive Harrison Chase (Josh Swickard) by her side.

Shiloh will try to rattle Willow with a creepy promise. He’ll insist that when this is all over, they WILL be together again. Willow won’t be happy about Shiloh’s comments, but she won’t let him get to her. She broke free from Shiloh’s grip and won’t let him reel her back in. Even if Shiloh settles for just being with “Wiley Cooper-Jones,” Willow will do whatever it takes to protect the boy she believes is her son.

Nevertheless, that doesn’t mean Shiloh won’t take what he wants by force. Everyone will need to keep an eye on this guy in the coming episodes. You can bet Shiloh’s going to shake things up! At the police station, Sonny Corinthos (Maurice Benard) will deliver a fierce warning to Cassandra. He’ll make it crystal clear that Cassandra should watch her back.

Cassandra targeted Sasha Gilmore (Sofia Mattsson), someone Michael Corinthos (Chad Duell) cares about. It also happened on Sonny’s island, so Cassandra’s too close for comfort. Sonny won’t tolerate somebody messing with his family and the people closest to them, so Cassandra needs to listen and take his menacing advice.