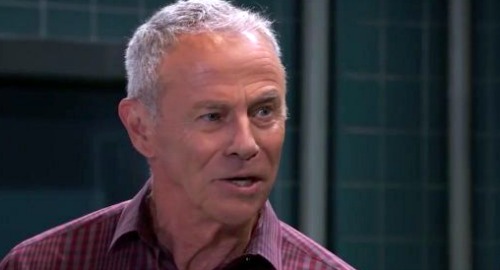 General Hospital (GH) spoilers tease that Tristan Rogers is officially back as Robert Scorpio and he’s here to stay. According to Soap Opera Digest, the actor is excited about being back and his alter ego’s new job as DA. Tristan leaks that he doesn’t know what is ahead for his character, but he wanted to talk about his comeback. Here’s the insider facts you need to know about what’s ahead on GH.

Rogers Never Talked To Frank Valentini About His Storyline

Rogers reveals that he made a point not to talk to Valentini about Robert’s future storylines. He said he did that for a few reasons. One, he wanted to be surprised so when he read the script he could be more in the moment and not anticipate what was coming up. And two, because things change in this industry. He didn’t want to think the storyline was going in a certain direction to have it change at the last minute.

“I never actually sat and asked Frank for information,” the actor said. “I told him ‘Don’t tell me too much. I’d rather be surprised than sit down and try to get involved with what you are telling me for the future and have that all change!’ And, it did change before it was shown on TV!”

The Change Was For The Better

Tristan Rogers said that he was upset by the way the show handled Robert Scorpio’s presence on the show from 2012 to 2018. He felt that his character had earned a legacy presence and felt like his short stints were nothing but to drive certain plot points and lacked substance.

Scorpio was never really involved with anyone and his storylines were dull. So, when the GH actor learned that he would be sticking around and it would give his character the storyline he’s deserved for seven years, Rogers jumped on it.

The way Robert is interacting with everyone on General Hospital now reminds him of the Robert Scorpio from the 1980s and the 90s. He is so happy that ABC is finally giving Scorpio the respect and storyline he deserves!

The only thing Rogers says is a challenge is to change the script so his lines sound more like legitimate Scorpio. He said that the GH writers don’t give him a script that says things that Robert would say, so it’s on him to Scorpio-tize it.

Are you glad that Robert Scorpio is back? Do you find his distinctive character and humor enrich the show. Don’t forget to come back to CDL for more General Hospital (GH) spoilers, news, and casting updates!