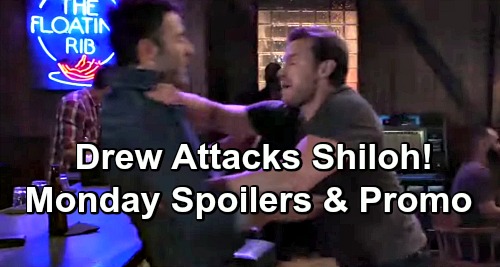 General Hospital (GH) spoilers for Monday, July 22, tease that Jasper “Jax” Jacks (Ingo Rademacher) will have some questions for Nina Reeves (Cynthia Watros). As GH viewers know, Nina figured out that Valentin Cassadine (James Patrick Stuart) had enlisted Curtis Ashford (Donnell Turner) to dig up dirt on Jax, and she’s asked Curtis to secretly share the dirt with her as well.

But Jax is a pretty perceptive guy, and he’ll tell Nina on Monday’s episode that he gets the feeling that there’s something she’s not telling him. Nina will no doubt try to deflect attention away from what she’s doing, but Jax will probably be left with the feeling that something’s just not right there. How long until he figures out what Nina’s up to…and what Valentin’s up to?

Meanwhile, Valentin and Ava Jerome (Maura West) will have a tense run-in. GH viewers will remember that Ava’s psychic, Sibley Gamble (Veronica Cartwright), unnerved Valentin recently with a psychic message from the deceased Madeline Reeves (Donna Mills). Valentin may have some questions for Ava about her relationship with Sibley, since he may consider Sibley a threat if she knows too much about his clandestine activities.

Next, on the new episode of General Hospital on Monday, July 22, Neil Byrne (Joe Flanigan) will sit down for a conversation with Alexis Davis (Nancy Lee Grahn). It looks like Neil may decide that he can treat Alexis after all, as it certainly seems that they’re having a therapy session. GH spoilers say that Alexis will be looking for closure about something, and Neil will offer advice. He’ll suggest that she put something to the test, so it looks like he’s willing to help.

Other General Hospital spoilers say that Lulu Falconeri (Emme Rylan) will reel from having received divorce papers from Dante Falconeri (Dominick Zamprogna). Laura Collins (Genie Francis) will offer her support as Lulu tries to process what’s just happened, and she’ll advise her daughter that she has a choice – she can give Dante what he wants or fight him on it. Lulu will likely need some time to consider her options.

Meanwhile, Sonny Corinthos (Maurice Benard) and Olivia Quartermaine (Lisa LoCicero) will react to the news about Dante’s petition for divorce. They’ll be stunned to learn not only that Dante wants to end his marriage, but also by the news that he shot Peter August (Wes Ramsey). The distraught parents will hate to hear that their son is in such bad shape, and they’ll likely wonder what they can do to help Lulu.

Elsewhere, Jordan Ashford (Briana Nicole Henry) will push Stella Henry (Vernee Watson) for more information about something, As GH viewers know, Stella was recently notified that she had a DNA match from an online ancestry kit that she submitted. Stella previously said that she wasn’t interested in finding out who the match was, and it looks like Jordan will question that, as she’ll wonder whether Stella’s truly at peace with her decision.

Finally, on Monday’s new episode of General Hospital, Drew Cain (Billy Miller) and Shiloh Archer (Coby Ryan McLaughlin) will have an altercation at The Floating Rib. The two men have already had words, but it looks like Shiloh won’t be able to leave well enough alone, and he’ll once again push Drew’s buttons, which will result in Drew shoving the cult leader up against the bar.

It sounds like a lot of GH drama is heating up for Monday’s episode, so stay tuned! We’ll give you updates as GH news comes in. Stick with the ABC soap and don’t forget to check CDL often for the latest General Hospital spoilers, updates, and news.