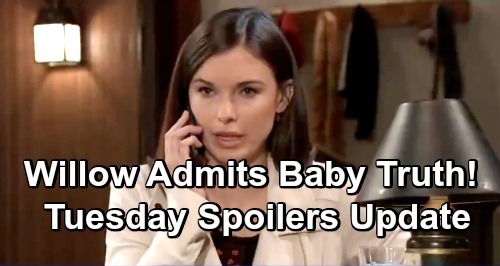 General Hospital (GH) spoilers for Tuesday, April 16, tease that major drama’s ahead in Port Charles. Due to the preemption, Monday’s episode will be aired on Tuesday. However, we’ve got all the hottest and latest info, so you’ll know exactly what to expect.

For starters, Brad Cooper (Parry Shen) will become passionate about Dawn of Day. He’ll talk to Lucas Jones (Ryan Carnes) about Shiloh Archer’s (Coby Ryan McLaughlin) book and suggest they should be part of a seminar. Nearby, Willow Tait (Katelyn MacMullen) will eavesdrop and look horrified. She’ll realize big trouble could be brewing.

Soon after, Lucas will spot Willow and exchange introductions with her. When Brad realizes Willow isn’t leaving town after all, he’ll respond awkwardly. This obviously isn’t the news Brad was hoping for! Of course, Willow wasn’t hoping to hear about his interest in Dawn of Day either. She’ll decide to contact Michael Corinthos (Chad Duell) and do something about this growing threat.

When Michael meets up with Willow, she’ll promise to speak with Kristina Corinthos-Davis (Lexi Ainsworth) and share her story. Willow will just want to make sure this conversation happens as far away from Shiloh as possible. Talk will turn to Willow being duped into sex, which will lead to a major confession.

Meanwhile, Jason Morgan (Steve Burton) will have a special task for Elizabeth Webber (Rebecca Herbst). He’ll push Liz to take the cup he stole to the lab and have it tested. Liz will agree, but Brad will get in the way. After Shiloh bumps into Brad and spots the cup, the cult leader will assume Jason passed it along.

Shiloh will argue that Jason wants to discredit DoD and drag them down. He’ll encourage Brad to just tell Jason there was only tea in the cup, so that’s exactly what Brad will do. He’ll assure Jason that there were no traces of drugs. Brad has no idea that he’s making a worse mess for himself!

At Crimson, Spencer Cassadine (Nicolas Bechtel) will urge Nina Reeves (Michelle Stafford) to get a grip on Valentin. He’ll rant about Valentin potentially cutting Laura Webber (Genie Francis) out of Charlotte’s life. Nina will think Spencer needs to stop harassing Valentin, but the kid will insist that he’s being blackmailed. Spencer will even mention that Valentin is keeping some Sasha Gilmore (Sofia Mattsson) secrets.

That’s when Valentin will walk in and get rid of Spencer. He’ll call Nora to back down on the custody issue and warn Spencer that this is the last time his patience will be tested. Once Spencer scampers off, Nina will grill her fiancé about Sasha. She’ll wonder if he’s truly hiding something, but Valentin will insist he simply gave Sasha some cash for shopping.

Over with Cameron Webber (William Lipton), he’ll be scolded for a fight he got into at school. After Liz and Franco Baldwin (Roger Howarth) interrogate him, Cam will admit another teen called Aiden a “fairy boy.”

He’ll be upset about the name-calling and argue that Aiden isn’t like that. When Cameron wonders if Aiden could be a “little less gay,” Franco and Liz will scold him for not showing his support.

Finally, Sam McCall (Kelly Monaco) will get permission to search through Kristina’s room with Daisy Kwan (Kelsey Wang). General Hospital spoilers say Daisy will admit something disturbing while they’re searching. She’ll note that there are serious consequences for changing your mind about “The Trust.” Daisy won’t offer much more, but she’ll at least mention “the pledge” and leave Sam concerned.

It sounds like another exciting episode’s on the way. We’ll give you updates as other GH details emerge. Stay tuned to the ABC soap and don’t forget to check CDL often for the latest General Hospital spoilers, updates and news.