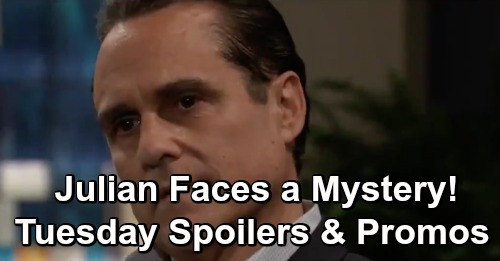 General Hospital (GH) spoilers for Tuesday, April 2, tease that a very special episode is on the way. GH is celebrating their 56th anniversary with a look back at the show’s lengthy history. Fans can expect some fun flashbacks and an exciting return. Denise Alexander will reprise her role as Dr. Lesley Webber, so that’s definitely something to look forward to.

While Lesley catches up with Dr. Monica Quartermaine (Leslie Charleson), Epiphany Johnson (Sonya Eddy) will have a chat with Elizabeth Webber (Rebecca Herbst). General Hospital viewers know Franco Baldwin (Roger Howarth) isn’t Epiphany’s favorite person, but she understands how much Liz loves him. Epiphany will let Liz know she’s got her back on Tuesday. The staff members at GH are a team, so they’ll always support each other.

Over with Alexis Davis (Nancy Lee Grahn), she’ll gather everyone for Dr. Gail Baldwin’s bequest to GH. Alexis told Laura Webber (Genie Francis), Liz and Franco that a long list of people were asked to be there, and she wasn’t kidding! It’ll be a full house as Alexis reveals Gail’s final wishes, which will include some surprises.

Even Julian Jerome (William deVry) will be in attendance, but he’ll have to wonder what he’s doing there. Alexis will assure Julian that all will be revealed in time. This big announcement will affect many General Hospital characters, so it’s important for everybody to come together and listen up.
At this meeting, Scott Baldwin (Kin Shriner) will get a message that leaves him deeply moved. It sounds like Gail had some sweet parting words for him. Meanwhile, Felicia Scorpio (Kristina Wagner) will have a heartfelt conversation with Bobbie Spencer (Jacklyn Zeman). They’ll reflect on days gone by and share a hug before long.

Other General Hospital spoilers say Maxie Jones (Kirsten Storms), Mac Scorpio (John J. York) and Sonny Corinthos (Maurice Benard) will also be on hand. GH viewers will also see a close moment between Dr. Kevin Collins (Jon Lindstrom) and Lucy Coe (Lynn Herring). Kevin may worry about upsetting the others in attendance, but Lucy will insist this is where he’s meant to be.

Laura will witness Lucy’s care for Kevin, but she’s shown she how much she cares as well. She posted Kevin’s bail, so that should be something he figures out and thanks her for on Tuesday. General Hospital spoilers say a fantastic show is coming up, so stay tuned. We’ll give you updates as other GH news comes in. Stick with the ABC soap and don’t forget to check CDL often for the latest General Hospital spoilers, updates and news.