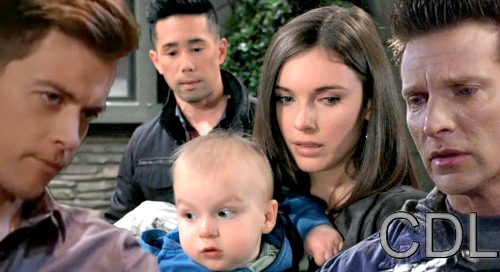 General Hospital (GH) spoilers tease that Michael Corinthos (Chad Duell) is in for a shock. During the week of April 1-5, Willow Tait (Katelyn MacMullen) will make a major confession. Michael will also be shaken up by something he learns, so it makes sense that Willow will come clean to him.

Willow knows how evil and controlling Shiloh Archer (Coby Ryan McLaughlin) can be. She may realize just how deeply involved Kristina Corinthos-Davis (Lexi Ainsworth) is and offer a warning. Willow certainly wouldn’t want Kristina to go down the same path she went down. There’s still a chance for Kristina if she gets out while she still can.

That could push Willow to divulge the whole shocking story to Michael. She may fill him in on her troubling past with Dawn of Day – including the fact that she was manipulated into having sex with Shiloh. Willow was disgusted as she shared that part of her experience with Harrison Chase (Josh Swickard). Shiloh made her feel like it was some great honor to be chosen, but it obviously wasn’t.

You can bet Shiloh will want to take Kristina to bed unless something changes. Willow might hope she can be the one to spark that change. Of course, she’s also been worried about Brad Cooper’s (Parry Shen) interest in DoD. Shiloh welcomes children to his seminars and classes, so Willow knows Shiloh could end up dangerously close to “Wiley Cooper-Jones.”

Since Willow believes that’s her son as well as Shiloh’s, General Hospital spoiler say that could be part of her confession as well. Michael and Willow don’t realize that “Wiley” is actually Jonah Corinthos, but there’s still a good reason to get Michael involved here. Brad and Lucas Jones (Ryan Carnes) made Michael the kid’s godfather, so he’ll want to protect him.

Michael may soon realize that the threat is far worse than he thought. He might see that Shiloh could target both Kristina and “Wiley,” so that’ll make the situation truly dire. After Michael gets shaken up on April 9, GH spoilers state that Jason Morgan (Steve Burton) will leap into action. He’ll have to make a split-second decision that could lead to trouble.

Willow will feel safe at last soon after, so Michael’s news could be what convinces Jason to do something drastic. General Hospital spoilers hint that Shiloh may fake his death or drop off the map somehow, so expect a crisis for Harmony (Inga Cadranal) over at the Beechers Corners chapter of DoD.

It looks like this storyline’s about to heat up! We’ll give you updates as other GH details emerge. Stay tuned to the ABC soap and don’t forget to check CDL often for the latest General Hospital spoilers, updates and news.