General Hospital Spoilers Next 2 Weeks: Drew and Kim’s Worst Nightmare – Shiloh Goes Past The Point of No Return 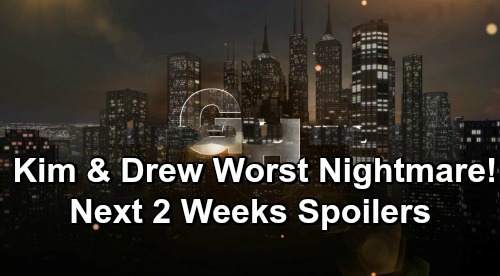 General Hospital (GH) spoilers for the next two weeks tease that some hot drama’s ahead. During the week of April 1-5, alarming news will spread. Oscar Nero’s (Garren Stitt) loved ones will be the ones affected by his news, so it sounds like he’ll have his worst seizure yet. Drew Cain (Billy Miller) and Dr. Kim Nero (Tamara Braun) will fear the worst when they face this crushing blow.

Oscar’s parents know his time is running out, but that won’t stop them from wanting to stretch it out for as long as possible. The same goes for Josslyn Jacks (Eden McCoy), who’ll also open up to Cameron Webber (William Lipton) over breakfast this week. Later, Joss will want to get in touch with Carly Corinthos (Laura Wright) ASAP, so she may need her mom’s support after Oscar’s collapse.

Other General Hospital spoilers say the show’s 56th anniversary will be celebrated. Alexis Davis (Nancy Lee Grahn) will gather everyone named in Gail Baldwin’s (Susan Brown) will for the final phase of her requests. Scott Baldwin (Kin Shriner) will be deeply touched by a message he receives. Dr. Lesley Webber (Denise Alexander) will also be on hand for this fantastic anniversary special.

Alexis will also get tangled up in something related to Julian. This will reading will somehow put her in Julian’s path, which will lead to an interesting discussion. General Hospital spoilers state that Alexis will have to figure out what’s going on in that complicated heart of hers. Whatever Julian says may help her draw some conclusions.

During the week of April 8-12, Ava Jerome (Maura West) and Carly Corinthos (Laura Wright) will spar again. Ava may be sober this time, so she probably won’t be as fragile. We should start seeing a more aggressive Ava as GH builds to Ryan Chamberlain’s (Jon Lindtrom) apparent comeback. Ava won’t back down from her goal later, so she may plan to stand up to Ryan once and for all!

Over with Shiloh Archer (Coby Ryan McLaughlin), General Hospital spoilers reveal that Sam McCall (Kelly Monaco) will cause a distraction. She may try to gain Shiloh’s attention in hopes of taking it off Kristina Corinthos-Davis (Lexi Ainsworth). Then again, this could be about giving Jason Morgan (Steve Burton) a chance to put a plan in motion.

Shiloh will also get a stern warning from Harrison Chase (Josh Swickard). Chase will make it clear that Shiloh needs to back off Willow Tait (Katelyn MacMullen) or risk consequences. Meanwhile, Willow will make an admission right around the time Michael is stunned. He may hear the extent of Willow’s horrible history with Shiloh and push Jason to act fast.

Harmony will send out an SOS a little later. She may need all hands on deck after Shiloh trouble hits. Will Dawn of Day’s fearless leader be in danger? Will he fake the danger instead and set Jason up? You can never be sure of what’s up Shiloh’s sleeve, so it’s wise to be wary. GH buzz makes it clear that Shiloh winds up past the point of no return.