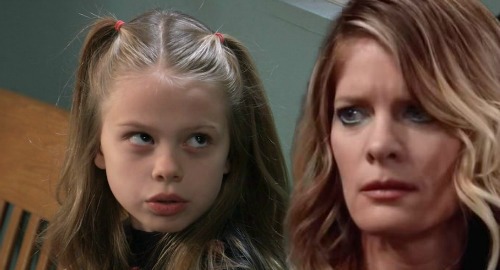 General Hospital (GH) spoilers has some updates to pass on about Michelle Stafford’s (Nina Reeves) departure from GH. As CDL has reported, Michelle is leaving General Hospital to reprise the role of Phyllis Summers on The Young and the Restless. Since the news broke, some of Michelle’s costars at GH have expressed their surprise and weighed in on the development.

James Patrick Stuart (Valentin Cassadine) was apparently surprised by the announcement that his leading lady would be leaving GH. Of course, James and Michelle have worked closely together for the past few years as Valentin and Nina, and they make a great couple.

The two characters have had a rocky history but have recently become engaged again. However, Valentin is keeping a big secret from Nina – he arranged for Nina’s long-lost daughter to be found, only it’s all a sham set up by Valentin.

In response to a Soap Opera Digest tweet announcing the news of Michelle’s departure, he replied: “I’ve never wanted so much to believe in ‘fake news.’” And a bit later he posted a photograph of himself with Michelle stating: “It’s all fun and games…Until you lose Michelle Stafford.”

James is likely wondering what the future will hold for Valentin now that the character of Nina will either leave entirely or be recast. There’s no word yet on what TPTB plan to do with Nina’s character, but whatever they decide will have a big impact on James. He could be looking at some dropped storylines or at developing some quick chemistry with a new actress playing Nina.

In response to James’ tweets, Scarlett Fernandez, who portrays Nina’s stepdaughter Charlotte Cassadine, stated: “Not funny at all!” Nina and Charlotte have shared many sweet scenes together over the years, and currently Nina is Charlotte’s champion against her teacher Willow Tait (Katelyn MacMullen).

Later, on Instagram, James Patrick Stuart posted another photo of himself with Michelle, along with some sweet words for her in French: “Michelle, je t’adore. Merci d’avoir rendu ma vie et mon travail si magiques. Tu vas tellement me manquer.” That translates to: “Michelle, I adore you. Thank you for making my life and work so magical. I will miss you so much.”

And William deVry, who portrays Julian Jerome on GH, weighed in on the news as well. He replied to the news of Michelle’s departure by simply saying “Crazy [expletive].”

It certainly seems like the news of Michelle’s departure came as quite the shock to Michelle’s costars. But this is not altogether uncommon in the industry, as contract negotiations can fall apart quickly, which apparently was the case with Michelle’s negotiations with GH.

Were you as shocked as Michelle’s costars about her impending departure from GH and return to Y&R? At this point Nina’s future on the show is unclear – write-off or recast. Stay tuned to the ABC soap and don’t forget to check CDL often for the latest General Hospital spoilers, updates, and news.