General Hospital Spoilers: Will Nina Be Killed Off or Recast – Michelle Stafford’s Exit For Y&R Major Impact On GH Storylines 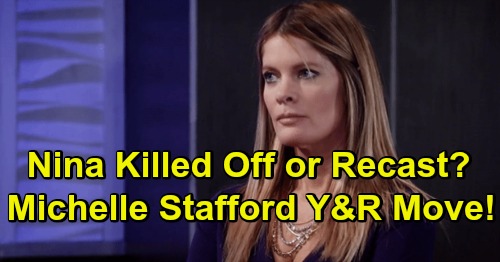 General Hospital (GH) spoilers has some big casting news to discuss – will Nina Reeves be killed off or recast? As CDL previously reported, Michelle Stafford, who currently portrays Nina Reeves on the ABC soap, will be leaving GH to reprise the role of Phyllis Summers on The Young and the Restless – replacing Gina Tognoni as Phyllis Summers –  Tognoni has been let go, or fired, as it’s less delicately known.

The news has left many GH fans scratching their heads about how TPTB are going to deal with Michelle’s departure, as Nina is a big part of some major storylines right now. Valentin Cassadine (James Patrick Stuart) is currently duping Nina into believing that Sasha Gilmore (Sofia Mattsson) is her long-lost daughter, and that storyline seems far from being resolved.

Nina is set to re-marry Valentin, and it has been looking like the story’s being set up for Valentin and Sasha’s lie to be revealed either right before or right after the wedding. And since Nina is just in the planning stages of her wedding right now, it will likely be several weeks at least before any nuptials occur.

Then there’s the matter of who exactly is Nina’s long-lost daughter. There’s been a lot of friction between Nina and Willow Tait (Katelyn MacMullen) recently, which almost certainly means that Willow will turn out to be in possession of the other half of Nina’s necklace and therefore be her daughter. But there’s no indication that this storyline will come to a conclusion anytime soon.

Plus, Willow is wrapped up in another big storyline with Shiloh Archer (Coby Ryan McLaughlin) and the Dawn of Day group, and that seems to be taking precedence over any reveal about Willow having the necklace.

What all of this means is that Michelle Stafford will be exiting the role of Nina before the major issues in her storylines are anywhere near being wrapped up. And that suggests that TPTB will need to recast the role in order to follow the storylines through to their natural conclusions.

The only problem with a recast is that Michelle Stafford has a very strong on-screen presence and plays Nina with an exuberance that will be hard to duplicate, and so she’ll be a difficult person to recast. Plus, she has powerful chemistry with James Patrick Stuart that will be difficult to recapture, at least at first, with another actress.

But the situation is what it is, and Michelle will be exiting at an inopportune time for GH. Do you think Nina Reeves will be killed off or simply leave Port Charles – or will she be recast? We’ll see how ABC Daytime handles the situation, and we’ll keep you informed as more news comes in about Michelle’s exit. Stay tuned to the ABC soap and don’t forget to check CDL often for the latest General Hospital spoilers, updates, and news.