The Young and the Restless Spoilers: Michelle Stafford OUT at General Hospital – Replaces FIRED Gina Tognoni as Phyllis Summers 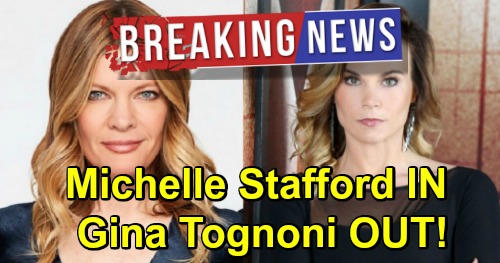 The Young and the Restless spoilers has some breaking news to report about the status of two leading soap ladies. Michelle Stafford, who is currently portraying Nina Reeves on General Hospital, will soon be leaving GH to reprise the role of Phyllis Summers on Y&R, replacing Gina Tognoni who has been fired.

This means that Gina Tognoni, who has portrayed Phyllis Summers on Y&R since 2014, will be vacating the role. Daytime Confidential is reporting that Gina has been let go from The Young and the Restless. Just for those Y&R and GH fan unclear on what ‘let go’ means – it means ‘fired.’

According to inside sources, Michelle Stafford and TPTB at General Hospital were unable to reach an agreement during contract negotiations, which went down to the wire. And shortly thereafter, Y&R was able to scoop her up. That ultimately led Y&R to the decision to cut Gina Tognoni loose from the role of Phyllis.

Viewers will remember that Michelle Stafford portrayed Phyllis Summers on The Young and the Restless from 1994-1997, and then again from 2000-2013. Gina Tognoni took over the role in 2014, when Phyllis woke up after being comatose for 13 months.

We’ll keep you informed as more information about this story becomes available. Stay tuned to the CBS soap and don’t forget to check CDL often for the latest Young and the Restless spoilers, updates, and news.