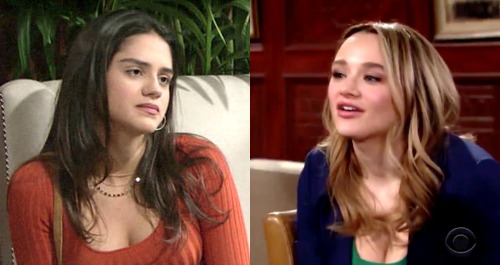 The Young and the Restless (Y&R) spoilers tease that Summer Newman (Hunter King) will think her plan’s paying off. She’ll grow closer to Kyle Abbott (Michael Mealor) as they join forces for a project at Jabot. They’ll blow the Abbotts away with their brilliant strategy, so Kyle will have to admit they make a pretty good team.

Kyle will even think they’re a pretty good match in their personal lives, especially when he witnesses a moment of patience. Summer will have to deal with some Dina Mergeron (Marla Adams) drama, but she’ll handle it well. The Young and the Restless spoilers say Kyle will be impressed and touched by how gentle she is. He’ll see Summer’s softer side, so she’ll pick up on the fact that she’s winning him over.

Nevertheless, part of Kyle will still long for Lola Rosales (Sasha Calle). Just because his feelings for Summer are growing doesn’t mean his feelings for Lola will disappear. Y&R spoilers say Phyllis Summers (Gina Tognoni) will remind Summer of that later. After Phyllis hears about the liver transplant, she may call Summer out for forcing Kyle to marry her.

Phyllis tends to be a schemer herself, so she’s not in the position to judge. She is, however, in the position to give advice. Phyllis will feel it’s her duty as a concerned mom. She’ll argue that Summer shouldn’t let herself get lulled into a false sense of security. Phyllis will contend that Summer can’t truly trust Kyle when it comes to Lola, so some jealousy’s brewing.

After Phyllis suggests that Kyle could betray her, Summer will freak out and start making more demands. The Young and the Restless spoilers say she’ll go to Kyle and push him to prove his commitment. If Kyle’s really all in on this marriage, Summer will think he should show her. She’ll tell him to delete Lola’s contact info from his phone and give his wife his full attention.

It’ll break Kyle’s heart to erase the last remnant of Lola from his life. He’ll really struggle to do it, but he’ll ultimately cave in. Summer should be satisfied, but it probably won’t be long until another hurdle arises. Deleting some contact info certainly won’t wipe Lola out of Kyle’s mind. It might even make Kyle more tempted to seek out Lola in person.

Is Summer going too far with this marriage scheme? Should Kyle stop letting her push him around? We’ll give you updates as other Y&R news comes in. Stay tuned to the CBS soap and don’t forget to check CDL often for the latest Young and the Restless spoilers, updates, and news.