General Hospital Spoilers: Why Michelle Stafford Chose To Exit GH and Return To The Young and the Restless – Reasons Revealed 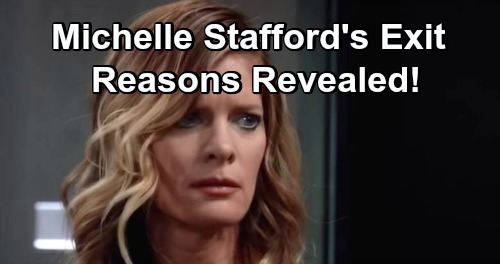 General Hospital spoilers (GH) delivered the Breaking News that Michelle Stafford who has played Nina Reeves since May 1, 2014, is departing the show and returning to The Young and the Restless where she will reprise her role as Phyllis Summers. Of course this big news also entails the bad news for Gina Tognoni fans that she was let go by TPTB at Y&R.

With the popularity of General Hospital’s Valentina couple (Valentin Cassidine and Nina) fans have to wonder why Michelle’s recent contract talks failed (according to Daytime Confidential).

Several soap opera sources are reporting that Michelle’s contract negotiations with General Hospital’s powers that be failed leading to this decision. Stafford has seemed happy in her role as Nina and enjoys working with co-star James Patrick Stuart. Could Michelle’s decision to leave be based on more than failed negotiations?

Could Michelle’s Exit Be Storyline Oriented?

Recent General Hospital spoilers indicate that Valentin’s secret about Sasha Gilmore (Sophie Mattsson) explodes leading to the end of Valentina. Nina and Valentin have had out of this world chemistry from the start. Nina was much more suited for Valentin than Silas Clay (Michael Easton).

Nina and Valentin made promises that weren’t kept and those broken promises lead to the characters separating. However, Valentina fans rejoiced when they reunited and were looking forward to their remarriage. Fans of the couple became upset when Valentin chose to lie to Nina yet again but still rooted for them to stay together. Could Michelle be upset over the ruination of her best GH pairing to date?

Nina and Franco Were Torn Apart As Well

Nina and Franco Baldwin (Roger Howarth) were popular with fans as well. Franco’s decision to not have a child with Nina was the last straw for her. However, writers then put Franco with Elizabeth Webber (Rebecca Herbst) who had three children herself.

Franco’s choice had to hurt Nina but could another failed romance have hurt Michelle as well? Michelle Stafford is a popular actress and fans can’t help but speculate that three failed relationship on GH would be the breaking point for any actor/actress.

Could Failed Pairing Be To Blame?

When Michelle joined General Hospital, she left The Young and the Restless where Jill Farren Phelps had her in a coma – but her character never lacked pairings on Y&R. Could the issue be that Stafford simply was not given everything promised to her in her first GH contract?

After five years, Nina has gone from a child kidnapper to the owner of a fashion magazine and pulled her life together, but the character has not been allowed to be in a happy relationship for any length of time.

Whatever the reason behind Michelle Stafford’s exit from General Hospital, fans will certainly miss what she has brought to the character of Nina. CDL is following the stories of Michelle leaving GH and joining Y&R as well as why new management at CBS decided to fire Gina Tognoni – we will report back as the truth is revealed.