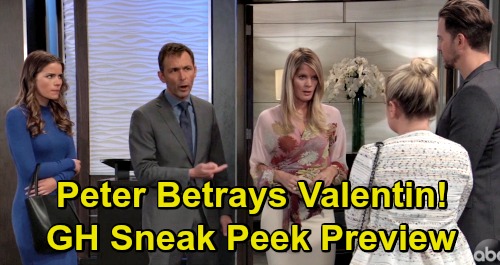 General Hospital (GH) spoilers and sneak peek video preview for Monday, April 1, tease that Nina Reeves (Michelle Stafford) will reel over Maxie Jones (Kirsten Storms) and Peter August’s (Wes Ramsey) decision to run another DNA test. Maxie and Peter were convinced that Sasha Gilmore (Sofia Mattsson) might not be the real deal, so they took matters into their own hands. However, the shocking results have thrown them for a loop.

At the Metro Court, Nina will insist that Sasha is her daughter. She’ll seem almost frantic as she assures Peter, Maxie and maybe even herself. Nina adores Sasha, so the thought of her not being her child would devastate her at this point. That’ll be evident based on her panicky, outraged reaction to the DNA test news.

As a speechless Sasha stands there with widened eyes, Valentin Cassadine (James Patrick Stuart) will feign outrage as well. He’ll call it an exercise in futility and insist that they’re just doing test after test to prove what’s already been proven. Maxie will eventually admit that Valentin is right. The latest test results will confirm Sasha is Nina’s daughter, so Maxie will look a bit guilty for doubting it.

Valentin will remind Maxie and Peter that he had two separate DNA tests done with Curtis Ashford’s (Donnell Turner) help. He’ll suggest that he would naturally make sure the results were irrefutable before he brought them to Nina. Valentin’s indignation will be way over the top, but that’s to be expected. Between the guilt and the stress of the situation, he’ll protest a tad too much!

Nevertheless, Nina will defend her lying fiancée. General Hospital’s Monday preview video shows Nina declaring, “Valentin would never ever say that he found my daughter if he hadn’t. What were you thinking?” Maxie will contend that she owes both Nina and Sasha an apology, but Sasha won’t think that’s necessary. She’ll get that Maxie was just looking out for Nina.

Of course, Sasha’s guilt will be driving things on her end. She won’t want Maxie getting in trouble when her suspicions were spot-on. Unfortunately, GH spoilers state that Nina will indeed be angry. She’ll wonder what even put an idea like this in Maxie’s head.

Nina won’t understand why Maxie would question Sasha’s daughter status, but Peter will explain that part. He’ll admit Liesl Obrecht’s (Kathleen Gati) leverage is the reason why. Peter will note that Liesl is holding something over Valentin, so they came to the conclusion that this had to be it. They’ll be sorry since the apparently altered results proved them wrong.

General Hospital spoilers say Valentin should get nervous all over again. Nina will look to him for answers, so he’ll have to add another layer to his web of deception. Valentin will need a lie that’s believable, but it can’t be something so heinous that it would turn Nina against him.

Since Sasha’s almost confession led Nina to believe there are skeletons in her fake daughter’s closet, maybe Valentin could suggest that it’s actually dirt on Sasha. He might argue that he was trying to protect some secrets for Sasha’s sake. That’s the kind of thing that would actually make Nina love Valentin even more.

Regardless, Sasha will worry when this mess winds down. She’ll feel like their scheme is out of control, but Valentin will work to keep her in line. Neither one of them will want to break Nina’s heart!