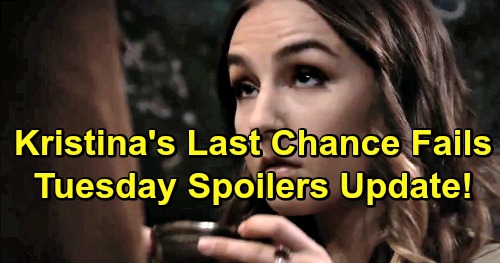 General Hospital (GH) spoilers for Tuesday, April 9, tease that Sonny Corinthos (Maurice Benard) will try to bring Kristina Corinthos-Davis (Lexi Ainsworth) out of DoD darkness. He’ll ask Dr. Neil Byrne (Joe Flanigan) to help him, but Neil may not provide much assistance. The doc will indeed give Sonny some guidance, but if it may not be what Sonny wants to hear.

Neil encouraged Alexis Davis (Nancy Lee Grahn) not to push too hard. Kristina isn’t a kid anymore, although she acts like one sometimes. Neil feels like Alexis should take a gentler and more gradual approach, but Sonny certainly won’t go for that. He knows time is running out, which is why he may send Jason Morgan (Steve Burton) to take care of business ASAP.

General Hospital spoilers say Jason will be on a mission to save Kristina soon enough. Sam McCall (Kelly Monaco) may agree that something has to be done. She just found Shiloh Archer’s (Coby Ryan McLaughlin) tattoo supplies in the attic, so she realizes Kristina’s about to get some fresh ink. Making this kind of commitment to Shiloh can only end in disaster, so Sam will want to help her sister.

Later, Kristina will be all set to kick off her journey. Before Kristina heads to the attic, she’ll be presented with an opportunity. Shiloh will insist that if Kristina goes any further, she won’t be able to turn back. When asked if she’s certain about joining “The Trust,” Kristina will confirm that she is. She’ll accept a presumably drugged drink as she prepares for her initiation ceremony.

Other GH spoilers say Willow Tait (Katelyn MacMullen) will do her part. She’ll want to stop Shiloh from hurting anyone else, so she’ll warn Michael Corinthos (Chad Duell) about the trouble ahead. Willow will fill Michael in on her own horrible experience with Dawn of Day in hopes of preventing Kristina’s. She’ll count on Michael to step up and get Kristina out of there somehow.

Over with Jordan Ashford (Briana Nicole Henry) and Curtis Ashford (Donnell Turner), they’ll discuss the Ryan Chamberlain (Jon Lindstrom) case. Jordan will tell Curtis that Margaux Dawson (Elizabeth Hendrickson) dropped the investigation, which obviously brings great risk. If Ryan is still out there like Ava Jerome (Maura West) and Jordan think he is, he could return to Port Charles and strike again.

That’s why Felicia Scorpio (Kristina Wagner) will think they have to be proactive. General Hospital spoilers say Felicia will gather with Ava and Laura Webber (Genie Francis). She’ll suggest some sort of trap that could lure Ryan out of hiding. Felicia will argue that it needs to be on their timetable, so this is the best course of action.

Unfortunately, Laura may put up a fight on this. She might think it’s too dangerous and would actually make things worse. Ava will end up agitating Carly Corinthos (Laura Wright) at some point, which could be about recruiting another team member. However, Carly may not be interested. She’s got a bun in the oven, so another Ryan-related ordeal isn’t what she has in mind.

Felicia may even bail on the idea eventually, but Ava will remain determined to stage a setup. She wants Ryan to face a deadly fate, so she’ll do everything in her power to make it happen. We’ll give you updates as other GH news comes in. Stay tuned to the ABC soap and don’t forget to check CDL often for the latest General Hospital spoilers, updates and news.