General Hospital Spoilers: Who Will Be Cast As Nina – Favorites Revealed To Replace Michelle Stafford 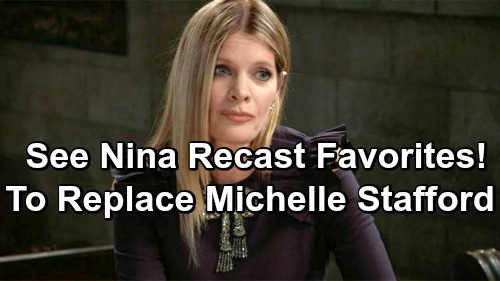 General Hospital (GH) spoilers have some news to pass on about GH’s search for a new Nina. As you probably know by now, Michelle Stafford is vacating the role of Nina Reeves to reprise her role as Phyllis Summers on The Young and the Restless, so General Hospital is on the hunt for a suitable Nina recast. Recasts are never easy on TPTB or on viewers, but this particular recast is difficult. Michelle Stafford has a strong screen presence, and the actress who replaces her will really have to hold her own.

As CDL has reported, soap vet Cady McClain is being considered as a possible Nina recast. She is best known for playing Dixie Cooney Martin on All My Children, and most recently played Kelly Andrews on The Young and the Restless. Cady is also Jon Lindstrom’s (Dr. Kevin Collins) wife, so if she joined the soap, she’d have the pleasure of working alongside her real-life husband.

But there’s another actress who has also been getting buzz as a potential Nina recast, and that’s soap vet Tracy Melchior. Tracy played Veronica Landers on The Young and the Restless, Kristen Forrester on The Bold and the Beautiful, and Kelly Kramer on One Life to Live. Reports are that Tracy has indeed thrown her hat into the ring to play Nina on General Hospital.

According to Soap Opera News Tracy said that she would love to dig into the character of Nina and into some in-depth storylines. She described speaking to Mark Teschner casting director for General Hospital about her interest in the part, and overall she seems very excited about the prospect of playing Nina.

Of course, there’s always another possibility for Nina, and it’s one that there’s been a lot of fan chatter about. Many fans would love to see Gina Tognoni, who will be vacating the role of Phyllis Summers on The Young and the Restless, take over the role of Nina on General Hospital. If that were to happen, then Gina and Michelle Stafford would simply switch places on their respective shows.

If that were to happen, it would be an unprecedented event for sure. We should note, however, that there’s been no industry buzz or suggestion that such a swap is going to take place, or is even being considered. But if many fans had their way, the swap would definitely be happening!

Who would you like to see as GH’s new Nina Reeves? Stay tuned to the ABC soap and don’t forget to check CDL often for the latest General Hospital spoilers, updates, and news.