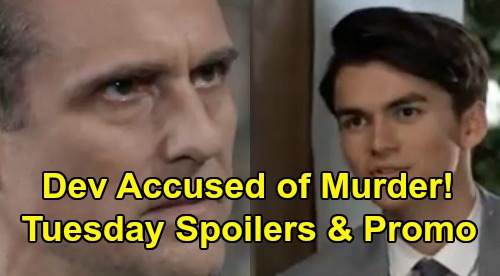 General Hospital (GH) spoilers for Tuesday, August 27, tease that Kim Nero (Tamara Braun) will hope to take a huge step forward with Julian Jerome (William deVry). She’ll impulsively ask “Charlie” to marry her, so Julian will be thrown for a loop. He’ll realize Kim’s rattled over Franco Baldwin’s (Roger Howarth) memories of being Drew Cain (Billy Miller), so he may turn down this proposal for now.

Kim’s already planning to run away from her problems by moving to Manhattan. That’s not going to work, and she can’t ignore the Franco situation by marrying Julian either. Kim’s found some poor coping strategies, so Julian may try to help her find some better ones.

Other General Hospital spoilers say Scott Baldwin (Kin Shriner) will also have Franco on his mind. He’ll worry about what the future holds, but Bobbie Spencer (Jacklyn Zeman) will provide a distraction. She might admit she caught the bouquet at Carly Corinthos (Laura Wright) and Sonny Corinthos’ (Maurice Benard) vow renewal.

Scott may suggest that’s a sign they should get married after all. He might be looking for a poor coping strategy of his own, but whatever he says won’t work out well for him. General Hospital spoilers state that Scott will push Bobbie too far, so he’ll get a glass of water thrown in his face.

Over with Elizabeth Baldwin (Rebecca Herbst), she’ll get a visit from Epiphany Johnson (Sonya Eddy). They’ll discuss Franco and how he’s keeping everyone who loves him at a distance. Liz will just wish she could get through to her husband. She’ll desperately want to draw the real Franco out somehow and rebuild their family, but she’ll feel her hope fading on Tuesday.

Elsewhere, Franco will get some tough love from Liesl Obrecht (Kathleen Gati). GH fans know Liesl doesn’t have much patience, so she’ll get fed up with fake Drew and his attitude. Liesl will slap Franco across the face and tell him to snap out of it, but that’s obviously not going to make Franco remember who he is. It will, however, let Franco know he shouldn’t cross Dr. O!

Back with Kim, she’ll let a call from Liz go to voicemail. Kim just won’t think she can deal with that right now. Franco will also disregard some advice from Liesl, so her pre-slap orders might include staying away from Kim and focusing on Liz. Since Franco doesn’t seem willing to do either of things, it won’t be long until he tracks Kim down again.

Meanwhile, Nina Reeves (Cynthia Watros) will fly into a rage over Cassandra Pierce’s (Jessica Tuck) selfie. She’ll fill Valentin Cassadine (James Patrick Stuart) on the pic Cassandra took at breakfast with Michael Corinthos (Chad Duell) and Sasha Gilmore (Sofia Mattson). Nina will seethe as she declares “that bitch” must’ve targeted her daughter. She’ll be mad enough to declare she wants to kill Cassandra, but Valentin will insist he can take care of that.

Michael and Sasha will also get updates soon, so they should figure out what happened rather quickly. Hamilton Finn (Michael Easton) knows Sasha must’ve been targeted through purposely contaminated food. Sasha and Michael should remember that bitter grapefruit as they process this horrifying Cassandra development.

Across town, Dev Cerci (Ashton Arbab) will ask Sonny Corinthos (Maurice Benard) if he did something wrong. Sonny will look awfully menacing as he replies that he doesn’t know. He’ll grill Dev about the missing person’s case Harrison Chase (Josh Swickard) just brought up and demand some answers.

Barry Ziegler got caught stealing and trying to pin it on Dev, so Sonny fired him and advised him to relocate. He also wanted Jason Morgan (Steve Burton) to check up on Barry and make sure their former warehouse foreman got the message. Sonny just wanted Barry to disappear, but perhaps some bloody evidence is pointing to foul play.

That could lead to some shocking murder accusations on Tuesday. Will Sonny think Dev killed Barry out of misguided loyalty? It sure seems that way, but maybe there’s another explanation for what actually happened.

Regardless, Dev will be on the hot seat and Sonny will be riled up! We’ll keep you posted as other GH news comes in. Stay tuned to the ABC soap and don’t forget to check CDL often for the latest General Hospital spoilers, updates and news.