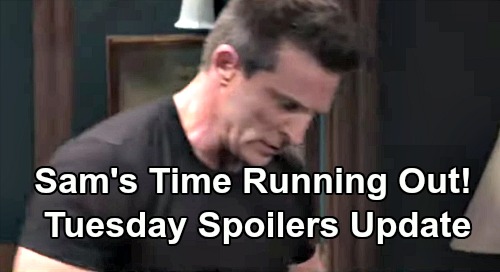 General Hospital (GH) spoilers update for Tuesday, August 6, tease that Jason Morgan (Steve Burton) will once again get violent with Shiloh Archer (Coby Ryan McLaughlin). Jason’s furious with Shiloh for kidnapping Sam McCall (Kelly Monaco) and trying to force him into a deal. Sam will die unless Jason cooperates, but he’ll still make Shiloh endure another round of pummeling.

Shiloh needs a memory-mapping candidate, but Jason seemingly isn’t going to work due to his prior brain injury. Nevertheless, Jason will try to handle this tricky situation and get Sam out of it alive. Over with Drew Cain (Billy Miller) and Curtis Ashford (Donnell Turner), they’ll discuss the latest developments. Drew will think Shiloh’s plotting something big, so he’ll want to save Sam and Jason from horrible fates.

Curtis will commit to helping Drew as the memory-mapping drama heats up. They’ll contact Sonny Corinthos (Maurice Benard) to join their rescue team, but Sonny will chat with Michael Corinthos (Chad Duell) first. He’ll have a piece of advice for his son, so this may involve Michael’s love life. Perhaps Michael will admit he’s falling hard for Sasha Gilmore (Sofia Mattsson) and get some guidance on that.

Michael doesn’t have a great track record when it comes to women. He tends to pick lying ladies with huge secrets, so Sonny may fear Michael’s getting in too deep, too fast. Regardless, Michael will listen up and decide if he likes what he hears.

At GH, Kim Nero (Tamara Braun) will explain her decision to Julian Jerome (William deVry). She already told Drew she’s leaving Port Charles, but it’ll be Julian’s turn to face the news on Tuesday. Kim will go over her reasons and suggest this is for the best, but Julian will undoubtedly try to change her mind. He was really hoping Kim would move in the old Dawn of Day house with him.

Kim will meet with Julian and Lucy Coe (Lynn Herring) next week, so Kim may give this departure decision a little more thought. She really needs to be around after the memory chaos wraps up. It looks like Franco Baldwin (Roger Howarth) may get Drew’s memories in a shocking twist, so that should bring some story opportunities.

Over with Josslyn Jacks (Eden McCoy), she’ll hang out with Cameron Webber (William Lipton) and Trina Robinson (Sydney Mikayla). It looks like Joss will have a pretty good day thanks to her big idea. Josslyn will feel like she knows exactly what to do. Her suggestion should lead to fun for the teen gang soon enough.

Elsewhere, Maxie Jones (Kirsten Storms) will wish she could ease Lulu Falconeri’s (Emme Rylan) pain. She’ll worry about her friend during her next conversation with Peter August (Wes Ramsey). Maxie’s heart will break for Lulu, but there may not be much she can do. Facing the end of her marriage to Dante Falconeri (Dominic Zamprogna) has been tough, so Lulu needs a chance to work through this in her own way.

Other General Hospital spoilers say T.J. Ashford (Tajh Bellow) will have some intriguing updates for Molly Lansing-Davis (Haley Pullos). He’ll surprise her by bringing up her future, so it seems he’s got something huge in mind. Finally, Alexis Davis (Nancy Lee Grahn) will suggest she’s reached the point of no return with Neil Byrne (Joe Flanigan). She’d like to remain Neil’s patient, but she’ll ultimately accept he may be right.

Alexis can’t look at Neil the same way after his daughter confession and their elevator song. Neil can’t look at Alexis the same way either, so this doctor-patient thing isn’t ideal now. A romantic relationship would be a far better option, but we’ll see how long it takes Neil and Alexis to get on board!