General Hospital Spoilers: Sasha Drifts Between Life and Death, Meets Kiki In The Beyond – Ava Finally Gets Closure? 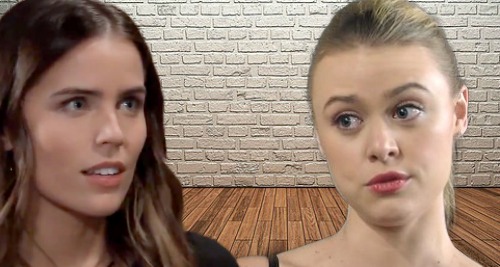 General Hospital (GH) spoilers tease that Ava Jerome (Maura West) will need a new plan if she wants to earn Kiki Jerome’s (Hayley Erin) forgiveness. Ryan Chamberlain (Jon Lindstrom) obviously isn’t capable of remorse, so he won’t be able to help on his end. Ava didn’t have much luck talking to Kiki herself either. The whole channeling thing didn’t pan out the way Ava wanted, but she’s not giving up.

Ava desperately wants to make peace with Kiki, and we have to hope she’ll achieve it. If she doesn’t, this entire storyline will have been for nothing. However, the answer to Ava’s problems may not lie with a psychic. Perhaps there’s someone else who could get through to Kiki and help Ava finally make amends.

GH fans know Ava’s been connected to Nina Reeves (Michelle Stafford) lately through Crimson. She got plenty of flak about her treatment of Kiki, but Ava was quick to offer a warning in return. Nina indeed has a long way to fall like Ava suggested. That should be evident after the fake daughter secret finally blows up.

Of course, there may be another reason GH is tying Ava’s drama to Nina’s. Cassandra Pierce (Jessica Tuck) injected Sasha’s grapefruit with something mysterious and most likely lethal. She may offer the antidote in exchange for something, but it’s reasonable to assume Sasha will be lingering between life and death. What better person to cross paths with Kiki and perhaps talk over Mama drama?

Maybe Sasha will be the one to give Ava closure at last. It’d be great if Hayley Erin could make an appearance or two, but General Hospital can still do this plot without her. Following the medical crisis, Sasha could awaken and mention speaking with Kiki offscreen in the beyond.

GH recently brought up Ava’s scandalous setup involving Sasha and Griffin Munro (Matt Cohen), which led to Ava and Kiki’s final feud. General Hospital spoilers say there may be a good reason for that. It’s possible Ava will make a plea to comatose Sasha. Since she’s been desperate enough to seek psychics, Ava could certainly be desperate enough to beg Sasha to reach out to Kiki if she can.

If not, Sasha could merely run into Kiki’s spirit as she’s fighting for her life. If Sasha shares her pretend mom woes, it could easily warm Kiki up to her own mother. Ava isn’t perfect, but she adores Kiki and doesn’t deserve to suffer forever due to Kiki’s grudge. Sasha might as well do some good while she’s stuck in this jam. A world of fake daughter trouble may be waiting once she gets through this!

Could Sasha be the key to ending Ava’s nightmare? Is this how GH will finally put the Kiki forgiveness storyline to rest? We’ll give you updates as other GH news comes in. Stay tuned to the ABC soap and don’t forget to check CDL often for the latest General Hospital spoilers, updates and news.