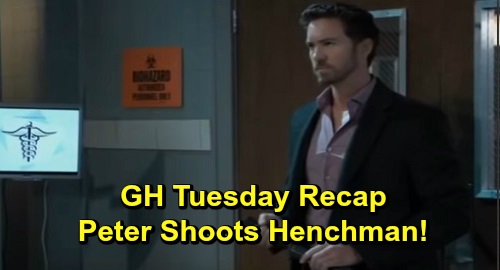 General Hospital (GH) spoilers recap for Tuesday, December 10, reveal that Peter August (Wes Ramsey) rushed into the hospital to find his henchman and stop the hit on Andre Maddox (Anthony Washington) and Franco Baldwin (Roger Howarth). He was briefly detained by Laura Collins (Genie Francis), who wanted to talk with Peter about prisoner overcrowding at Pentonville and The Invader’s lack of coverage on the issue. Peter struggled to get away from her, but ultimately did.

Meanwhile, Andre got the procedure underway on an unconscious Franco in the OR. Suddenly, the henchman burst in the room and pointed a gun at Andre. Andre rushed the guy, who dropped his gun on the floor while the two had a physical fight. The henchman eventually got the better of Andre and knocked him unconscious, but then Peter entered the room and picked up the gun as the henchman asked what he was doing.

Out in the waiting area, Cameron Webber (William Lipton), Elizabeth Baldwin (Rebecca Herbst), and Scott Baldwin (Kin Shriner) heard a gunshot, as did Anna Devane (Finola Hughes), who was in the hospital as well. Anna went to investigate and made her way to the OR, where she found Peter standing near an unconscious Franco and both Andre and the henchman on the ground. Elizabeth rushed in and checked the henchman, who was still alive, and Andre eventually regained consciousness.

Peter then lied and said that he was in the hospital and saw a guy in scrubs lurking around and followed him, then saw Andre’s struggle with the guy and ended up shooting him. Elizabeth and Andre turned their attention to Franco, realizing that the procedure had just finished. Elizabeth wanted to know if it worked, and Andre stated that they wouldn’t know until Franco woke up. And out in the hall, a suspicious Anna asked to have a word with Peter.

Meanwhile, Valentin Cassadine (James Patrick Stuart) paid Jasper “Jax” Jacks (Ingo Rademacher) a visit at his home. While Nikolas Cassadine (Marcus Coloma) hid in a back room, Valentin told Jax that he wanted to join forces to find Helena Cassadine’s (Constance Towers) portrait. Jax flatly refused, while Valentin noticed some of Nikolas’ things in the room and wondered who they belonged to.

Valentin even went snooping around out on Jax’s patio as they talked, and Valentin wondered who his secret partner was, and why that person was so interested in the codicil. Jax stayed mum, and Valentin finally left, after issuing Jax a warning to stay away from Nina Reeves (Cynthia Watros).

After Valentin left, Nikolas kept looking around for his insignia ring, then realized that he must have left it in Ava Jerome’s (Maura West) room at Shadybrook. Jax then headed to The Metro Court, where he encountered Griffin Munro (Matt Cohen) visiting with Maxie Jones (Kirsten Storms) and Laura. There, he learned the story of Charlotte Cassadine’s (Scarlett Fernandez) conception and birth.

Jax was particularly interested to learn about Claudette Beaulieu (Bree Williamson), the surrogate who had carried Charlotte, and about how she allegedly committed suicide. Griffin noted in conversation that he didn’t believe that Claudette had taken her own life – something Jax gave careful consideration.

Finally, at the gallery, Nina tried to convince Ava to partner up with her against the Cassadine men. Ava balked, thinking that Nina was “team Valentin,” but Nina eventually convinced Ava that she wasn’t on Valentin’s side – she was on her own side. Nina promised that she hadn’t told Valentin about Nikolas being alive, and that she was furious with Valentin for fabricating a fake daughter.

Ava wanted to know who else knew that she had turned against Valentin, and Nina admitted that Jax knew, which didn’t please Ava. But then Nina argued that Ava owed it to Spencer Cassadine (Nicolas Bechtel) to work against Valentin after letting him go free of Nikolas’ murder.

Ultimately, the two women agreed that it would feel good to have Valentin and Nikolas’ fate in their hands. Ava then revealed Helena’s portrait, which was hidden behind another painting, and told Nina that she knew exactly what they – as partners – would do next.