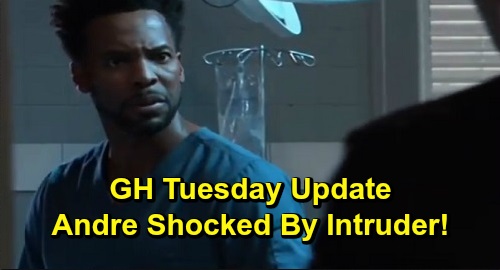 General Hospital (GH) spoilers for Tuesday, December 10, tease that Andre Maddox (Anthony Montgomery) will be interrupted. He’s just getting started on “Drew Cain” aka Franco Baldwin’s (Roger Howarth) procedure, but Peter August’s (Wes Ramsey) hitman is armed and ready to stop it. It looks like this hired gun will burst in the room, so there’ll definitely be some tense moments.

As for Peter, he’ll be stopped by Laura Webber (Genie Francis) at GH. Peter will nervously ask if they can talk later, but Laura will insist that this can’t wait. She’ll babble on and delay Peter, so that’ll present some extra challenges.

Meanwhile, Elizabeth Baldwin (Rebecca Herbst) and Scott Baldwin (Kin Shriner) will comfort Cameron Webber (William Lipton) as he prepares for the unknown. He’ll fret about what’s going to happen in that operating room, but the truth is it’s beyond Cam’s control.

Even Andre can’t guarantee a positive outcome, but Franco has accepted his odds and knows what he’s doing. Cam, Liz and Scott will have to accept those odds, too. Of course, they’ll all be hopeful that Franco will wake up and be back to his old self. There’ll be some snags along the way, but Peter’s hitman will fail and the procedure will continue. Franco will indeed awaken in the coming episodes, so Liz will be eager to see if the gamble paid off.

Other General Hospital spoilers say Maxie Jones (Kirsten Storms) will discuss her future. She’ll catch up with Griffin Munro (Matt Cohen), who’ll hear about Maxie and Peter’s decision to live together. Maxie will feel confident it was the right call, so Griffin may trust her judgment and wish them the best.

However, Peter’s bound to slip up with Maxie eventually. He’s been able to cover his blunders pretty well so far, but he can only keep things together for so long. Over with Nina Reeves (Cynthia Watros), she’ll try to convince Ava Jerome (Maura West) that she’s on her side. They’ll bicker about loyalty, but Nina will insist she’s committed to their Cassadine takedown efforts.

Both Valentin Cassadine (James Patrick Stuart) and Nikolas Cassadine (Marcus Coloma) could be in trouble if Nina and Ava’s scheme pays off. Until then, Valentin will have his own scheme cooking up. He’ll want to pool his resources with Jasper “Jax” Jacks (Ingo Rademacher) and hopefully achieve victory together. Valentin will suggest they can put their differences aside and make a solid team.

It’s in Jax’s best interest to be wary of joining forces – or even pretending to for that matter. When it comes down to it, Valentin only does what benefits him and him alone. Jax also happens to be juggling some major secrets – like the fact that Nikolas is alive.

General Hospital fans know Jax was trying to order Nik out of Port Charles when Valentin arrived. Will Jax consider selling out his difficult partner in crime? He may contemplate the idea, but the secret should remain under wraps for now – at least as far as Valentin’s concerned.

As for Nikolas, he’ll be left to fret over that missing ring and whose hands it might’ve landed in. Nik won’t realize Nina and Ava know the truth, so they’ll use that to their advantage for a while. We’ll give you updates as other GH news comes in. Stay tuned to the ABC soap and don’t forget CDL often for the latest General Hospital spoilers, updates and news.