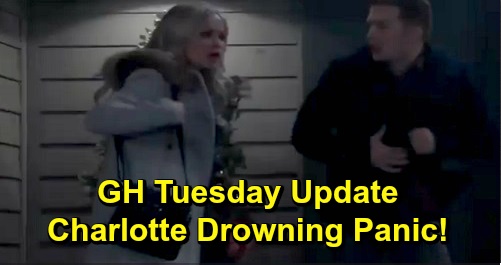 General Hospital (GH) spoilers update for Tuesday, December 17, teases that Peter August (Wes Ramsey) will wait to learn his fate. He’ll realize that his future rests on who Franco Baldwin (Roger Howarth) wakes up as. Peter will naturally fear Franco could remain “Drew Cain” and awaken with a flood of more intense memories. He’d much rather see Franco wake up as himself instead.

Fortunately, Peter won’t have to wait much longer. Franco’s already starting to stir in his room at GH, so Elizabeth Baldwin (Rebecca Herbst) will remain right by his side. She’ll ask if Franco remembers her, but he’ll look at bit dazed at first. It may take Franco a little while to process what’s happened to him, but General Hospital spoilers say Franco should be back to his old self soon.

In the meantime, Nikolas Cassadine (Marcus Coloma) will get busted in the backroom of the gallery. Trina Robinson (Sydney Mikayla) will come up behind Nikolas and ask who he is. She’ll also want to know what Nik’s doing back there, so he’ll definitely find himself in a bind.

Other General Hospital spoilers say Valentin Cassadine (James Patrick Stuart) will revel in his victory. He pulled off a major win at the auction – and he didn’t have to pay a dime. Trina tripped a server, who accidentally tossed pastries on Valentin and cost him the chance at a winning bid. He didn’t mind after the portrait caught on fire seconds later!

On Tuesday, someone will end up confronting Ava Jerome (Maura West) about her apparent scheme. Jasper “Jax” Jacks (Ingo Rademacher) might accuse Ava of setting up the flaming spectacle, but she’ll smile and ask why she would do a thing like that. Although Jax may not be able to figure out Ava’s whole game, he could be on the right track. That’s especially true since Nina Reeves (Cynthia Watros) pulled Jax out of the auction and warned him not to bid on the painting.

Valentin will just be glad the portrait and its many secrets are gone, but are they really? No way! That codicil is undoubtedly stashed someone for safekeeping by now. Of course, Valentin will soon be in total panic mode thanks to Charlotte Cassadine (Scarlett Fernandez). On the pier, Charlotte felt certain her secret bodyguard would save her if she jumped in the water.