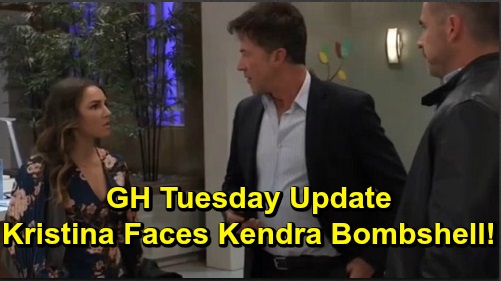 General Hospital (GH) spoilers update for Tuesday, December 3, teases that Curtis Ashford (Donnell Turner) and Jordan Ashford (Briana Nicole Henry) will have a little anniversary celebration. They’ll get steamy in the bedroom and enjoy reveling in wedding bliss afterward. Jordan and Curtis will definitely feel like they’re in a good place right now.

Of course, Jordan will have to head over to the scene of a car crash soon. Lucas Jones (Ryan Carnes) couldn’t get the brakes to work thanks to Julian Jerome’s (William deVry) murder plot. He wanted to get rid of Brad Cooper (Parry Shen), but he didn’t anticipate Lucas coming home from work early and driving Brad’s car.

Lucas also wasn’t expecting Brad to blurt out that “Wiley Cooper-Jones” (Erik and Theo Olson) wasn’t their baby. Brad revealed that their son actually belongs to Michael Corinthos (Chad Duell) and Nelle Benson (Chloe Lanier), but it doesn’t look like Lucas will be able to divulge the shocker yet. General Hospital buzz suggests Lucas will be in critical condition. In fact, it appears Lucas will end up in a coma after he’s rushed to GH.

Brad is supposed to survive despite Parry Shen’s Facebook post, which suggested he was leaving the show. It seems Shen was just messing with fans a bit, so Brad should live to tell the tale. We should also talk about temporarily paralyzed Alexis Davis (Nancy Lee Grahn), who was about to be run down by Kendra Lennon (Michelle Argyris) before Lucas sped in toward her SUV.

Alexis will escape the situation with her life, but will she be injured by one of the nearby cars? There’s a chance one of them could speed in her direction anyway, but at least she won’t be mowed down with murder in mind. It’s certainly possible Alexis will avoid being hit at all, so if one good thing came out of Julian’s derailed murder scheme – it’s that.

At GH, Kristina Corinthos-Davis (Lexi Ainsworth) will find Julian and Neil Byrne (Joe Flanigan). She’ll ask where her mom is, so Neil and Julian may bring her up to speed on the Kendra puzzle they’ve put together. They’ve determined that Kendra must be tied to Kiefer Bauer’s (Christian Alexander) family, so Kristina will surely be terrified about Kendra’s next move.

Kristina will be even more terrified when she hears about the car crash, but at least Alexis will fare better than she would’ve if Kendra had her way. As for Julian, he’s in for a horrifying shocker once he learns Lucas was in the accident. Julian will battle deep remorse over the coma his son will be facing. There’s no word yet on whether Kendra will survive the crash, but she should be headed to prison if she does! The point is Kendra’s character is kaput.

Other General Hospital spoilers say Carly Corinthos (Laura Wright) will have some strong words of warning. She’ll want someone to understand what Sonny Corinthos (Maurice Benard) is capable of, so that’ll probably be Jasper “Jax” Jacks (Ingo Rademacher). In Tuesday’s episode, Sonny will apparently deceive Jax. He’ll push Jax to stop pretending since Carly told him the whole story.

However, Sonny will most likely just be on a fishing expedition. He may hope he can trick Jax into spilling more details, but it’s doubtful Jax will take the bait. General Hospital spoilers say Sonny should remain in the dark on Nikolas Cassadine’s (Marcus Coloma) survival for now.

Finally, Willow Tait (Katelyn MacMullen) will get a push into doing what’s necessary. If she wants to know if she’s pregnant, there’s only one way to find out for sure. That’s what Sasha Gilmore (Sofia Mattsson) will point out to Willow on Tuesday. She’ll urge Willow to take a pregnancy test and face the truth.