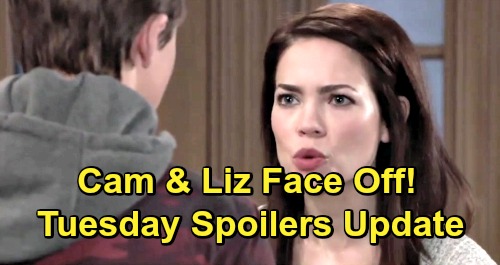 General Hospital (GH) spoilers update for Tuesday, February 12, tease that Laura Webber (Genie Francis) will pay Franco Baldwin (Roger Howarth) a visit behind bars. Of course, it won’t be a pleasant one. Laura will make it clear that Franco’s days of hurting people are over. She’ll vow to make sure he never has the chance to harm anyone ever again.

While Franco faces Laura’s fury, Drew Cain (Billy Miller) will talk to Jordan Ashford (Briana Nicole Henry) about the case. He just won’t think Franco’s capable of murder anymore. Drew will push Jordan to take a closer look at the facts and examine other suspects. He won’t care what the proof says. Drew will just trust his instincts and assure Jordan that Franco can’t be responsible.

Over with Elizabeth Webber (Rebecca Herbst), she’ll have an argument with her son. It seems Cameron Webber (William Lipton) will get a lecture after the brawl on Tuesday. Liz should remind Cam that his probation is no joke. The judge warned him to stay out of trouble, so Cameron needs to get serious about this. However, Cam won’t think that really matters when a murderer’s been under their roof.

Liz will rush to Franco’s defense, but Cameron will think she could be wrong about her fiancé. He just won’t know what to believe now that the evidence is mounting and Franco’s been arrested. Nevertheless, Liz will stand by her man and hope Franco wiggles out of this mess soon.

Spencer is pleased with the outcome, but he’s been wrestling with the big secret. He’ll open up to Sonny Corinthos (Maurice Benard) once more in Tuesday’s GH episode. Sonny will contend that there’s only one thing to do. He’ll urge Spencer to come clean to Laura and own up to his mistakes. Spencer will listen carefully, weigh his options and decide what his next move should be.

Liesl will insist on getting to know Sasha a bit better, but her questions should rev up the pressure. Sasha should feel quite threatened by the end of this discussion. On the bright side, Sasha will get a break once Nina shares some exciting news. As Valentin and Sasha sit nearby, Nina will tell Peter August (Wes Ramsey) and Maxie West (Kirsten Storms) that she’s remarrying Valentin.

Maxie and Peter don’t trust Valentin at all, but they obviously can’t control Nina’s love life. This is Nina’s decision – and her mistake since Valentin is once again lying to her. It sounds like Nina will face even more sorrow, but maybe some twists will save Valentin and Nina’s relationship in the end.

General Hospital viewers will want to check out Tuesday’s hot scenes. We’ll give you updates as other GH details emerge. Stay tuned to the ABC soap and don’t forget to check CDL often for the latest General Hospital spoilers, updates and news.