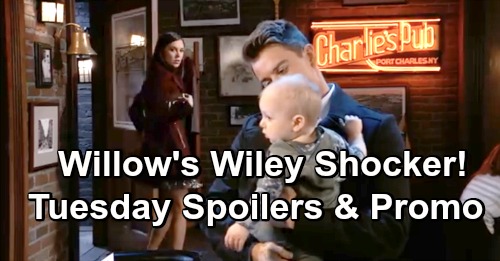 General Hospital (GH) spoilers for Tuesday, January 22, tease that Brad Cooper (Parry Shen) will make a sweet gesture. He’ll have a surprise for Julian Jerome (William deVry) and it’s sure to lift his spirits. Between Kiki Jerome’s (Hayley Erin) murder and this breakup with Dr. Kim Nero (Tamara Braun), Julian hasn’t had much joy in his life lately.

Thankfully, Julian will get to enjoy some quality time with “Wiley” Cooper-Jones. He’ll appreciate that and so will Michael Corinthos (Chad Duell) when it’s his turn. Michael’s always up for a little bonding with his godson, but the sight of him with “Wiley” will throw Willow Tait (Katelyn MacMullen) for a loop. She’ll play dumb as she asks about the baby in Tuesday’s new GH episode, January 22.

Meanwhile, Shiloh Archer (Coby Ryan McLaughlin) will have a chat with Alexis Davis (Nancy Lee Grahn). He’ll explain what Dawn of Day is all about and hope he can make Alexis see the benefits. Of course, Alexis won’t care about Shiloh’s views and coping strategies. The only thing she’ll be interested in is how Kristina Corinthos-Davis fits into all this.

Shiloh will flash a smug smile and most likely suggest that’s understandable. He’ll do his best to be charming, but will Alexis see right through his act? Over with Josslyn Jacks (Eden McCoy), she’ll manage to get Oscar Nero (Garren Stitt) to wake up. He just had another tumor-related setback in the building above the catacombs, so the timing couldn’t be worse.

This place seems awfully creaky and dangerous, so General Hospital spoilers say things are about to take a shocking turn. It looks like Joss and Oscar will get trapped, so they’ll worry about how they’re going to handle this. However, there may be some small opening that Josslyn could use. Oscar will point out that if Josslyn doesn’t go for help, they may never make it out.

Joss will have concerns about leaving Oscar behind, but it may not end up being an issue. There’s a good chance both teens will realize they’re truly stuck soon. Luckily, Cameron Webber (William Lipton) knows they were headed to the catacombs. That should be enough to put the adults in Josslyn and Oscar’s lives on the right track.

Kim will call up Drew Cain (Billy Miller) with an urgent message. She’ll let him know Oscar and Joss are in a risky situation, so he’ll start fretting as well. Sam McCall (Kelly Monaco) will also get updates on the teens’ terrifying ordeal. She’ll tell Jason Morgan (Steve Burton) she thinks she knows another way in the catacombs. Sam will assume Josslyn found the same entrance, so she’ll rush right over with Jason.

Carly Corinthos (Laura Wright) will also be in panic mode over all the teen drama. On the phone, Carly will blurt out that Josslyn’s in trouble. She’ll just hope this nightmare doesn’t end in disaster! We’ll keep you posted as other General Hospital news comes in. Stay tuned to ABC’s GH and don’t forget to check CDL often for the latest General Hospital spoilers, updates and news.