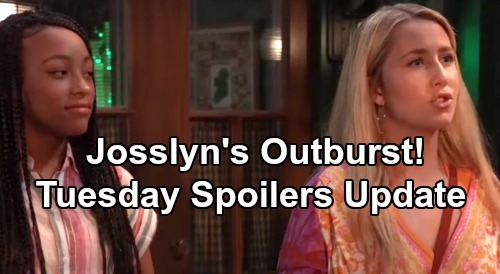 General Hospital (GH) spoilers update for Tuesday, July 23, tease that Lucy Coe (Lynn Herring) will make Sasha Gilmore (Sofia Mattsson) momentarily nervous. She’ll run into Michael Corinthos (Chad Duell) and Sasha at The Floating Rib and during the small talk, she’ll mention that in another life, Sasha could have been “the face of Deception.” Of course, Lucy will be referring to the perfume company that she owned called “Deception,” but Sasha won’t know that.

As GH viewers know, Sasha and Valentin Cassadine (James Patrick Stuart) are running a big scam on Nina Reeves (Cynthia Watros). Sasha is pretending to be Nina’s long-lost daughter, so she’ll probably wonder for a moment if Lucy is onto the scam! Look for some tense moments there.

Speaking of Valentin, he’ll get updates from Curtis Ashford (Donnell Turner) on what, if anything, Curtis has turned up on Jasper “Jax” Jacks (Ingo Rademacher) in recent days. As GH viewers will remember, Curtis recently found that Jax had files on both Valentin and Cassandra Pierce (Jessica Tuck), and on Tuesday’s episode, Curtis will wonder exactly what Valentin and Cassandra have in common. We’ll see what kind of explanation Valentin gives.

Meanwhile, on the new episode of General Hospital on Tuesday, July 23, Lulu Falconeri (Emme Rylan) will get out and about, and she’ll bump into a familiar face at The Floating Rib…Dustin Phillips (Mark Lawson), who was one of Lulu’s online “dates” for her work assignment. It looks like Dustin will be quite pleased to see Lulu again.

Of course, Lulu is currently struggling with having received divorce papers from Dante Falconeri (Dominick Zamprogna), so she might not be in the mood for socializing, but perhaps Dustin can cajole her into a drink – Lulu could use a distraction right about now!

Other General Hospital spoilers indicate that Josslyn Jacks (Eden McCoy) and the teen gang will spend some time together, and it looks like Josslyn and Dev Cerci (Ashton Arbab) will get into it again. These two seem to clash at every turn, and Joss will tease Dev a bit as Cameron Webber (William Lipton) and Trina Robinson (Sydney Mikayla) stand by.

Meanwhile, Carly Corinthos (Laura Wright) will develop some insight into Sonny Corinthos’ (Maurice Benard) feelings about Dev. Sonny has been going to extreme lengths to make Dev feel safe and at home in the Corinthos home. It seems something about their discussion will lead Carly to realize why Sonny’s trying so hard to help Dev. Of course, Sonny feels that he owes Dev for saving his life, but Carly will think it goes far beyond that.

Finally, it appears that Hamilton Finn (Michael Easton) and Hayden Barnes (Rebecca Budig) will finally sit down for a chat. It’s pretty clear that Hayden has been seriously avoiding having a real conversation with Finn since she came back to the Port Charles scene. Of course, this likely has to do with the fact that she was pregnant with Finn’s baby when she last left Port Charles!

On Tuesday’s new episode of General Hospital, the two will finally have words, and Finn will remark that Hayden’s really kept her fair share of secrets from him. Little does he know that she might be really keeping a doozy of a secret if she’s got a child out there somewhere that she’s been keeping from Finn! GH viewers will have to tune in on Tuesday to see where their conversation may lead.

It sounds like a lot of GH drama is heating up for Tuesday’s episode, so stay tuned! We’ll give you updates as GH news comes in. Stick with the ABC soap and don’t forget to check CDL often for the latest General Hospital spoilers, updates, and news.