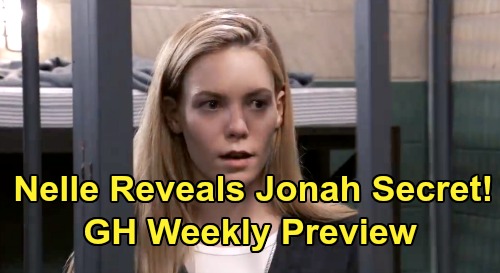 General Hospital (GH) spoilers preview for the week of July 22 to July 26 tease that viewers will see some major movement in the stories of two babies this week, along with “the mother of all confessions.” Of course, the two babies we’re referring to are Carly Corinthos (Laura Wright) and Sonny Corinthos’ (Maurice Benard) unborn child and “Wiley Cooper-Jones,” whom GH viewers know is really Jonah Corinthos, the son of Michael Corinthos (Chad Duell) and Nelle Benson (Chloe Lanier).

Let’s start with Carly and Sonny’s baby. The preview promo video shows CarSon following up with their doctor and inquiring as to the baby’s condition. GH viewers will remember that the baby was diagnosed with Spina Bifida, but it was unclear at the time of diagnosis just how serious the condition was. The baby could live a relatively normal life, or he or she could face some serious disabilities.

The promo also shows a brief scene on the Corinthos patio of Josslyn Jacks (Eden McCoy) looking upset and throwing something away in disgust as Cameron Webber (William Lipton), Dev Cerci (Ashton Arbab), and Trina Robinson (Sydney Mikayla) look on. This could indicate that the baby’s condition is pretty serious and Josslyn’s friends seem to be gathered around to offer support…GH viewers will have to tune in to see what this is all about!

Next, let’s turn to the story involving Wiley/Jonah. Before his arrest, Shiloh Archer (Coby Ryan McLaughlin) was just about to open the results of the secret DNA test that he had run on “Wiley.” He was expecting the results to show that he was the boy’s father. Well, in the promo, Shiloh is brief shown at the hospital – could he be revisiting those test results?

In addition, there’s a quick scene in the preview of Bobbie Spencer (Jacklyn Zeman), Lucas Jones (Ryan Carnes), Brad Cooper (Parry Shen), and Alexis Davis (Nancy Lee Grahn) all looking stoic. Of course, they’re currently under the belief that the Shiloh threat is contained, at least for the time being. But what if Shiloh realizes that he’s not “Wiley’s” biological father and spills the beans?

Well, the biggest revelation in this week’s General Hospital preview involves none other than Nelle. There’s a big lead-in to her appearance with a reference to “the mother of all confessions,” as Nelle is shown behind bars. GH viewers will remember that Brad finagled his way into Pentonville to tell Nelle that things were starting to unravel since the real Wiley’s birth parents were aware that Brad and Lucas adopted the boy.

Recall that Nelle also knows that Michael has a new girlfriend, Sasha Gilmore (Sofia Mattsson), and she’s not happy about it. Nelle noticed photos of Sasha and Michael together at The General Hospital Nurses’ Ball and got seriously jealous. Therefore, it’s probably not a coincidence that the promo shows a scene of Sasha, Michael, and “Wiley” together.

If Nelle has somehow gotten wind of the fact that Michael’s spending time with their son along with another woman in the picture, she’ll probably freak out. And when Nelle freaks out, she acts out, and that may explain her actions on GH this week. She’s shown talking with Michael in a holding room at Pentonville about a secret and telling him that “I know something that you don’t about what really happened to our son.”

Michael looks confused and little irked with Nelle, as she sits there with tears streaming down her face. Of course, Michael knows by now that Nelle enjoys tormenting him, so he’ll probably figure that she’s just trying to get under his skin with some additional details or secrets about how their baby Jonah died.

At any rate, ongoing General Hospital spoilers indicate that the Wiley/Jonah storyline is going to continue for a while longer, so it doesn’t look like Nelle is going to make a full confession about the fact that Wiley is in fact their son Jonah. She’ll probably dance around the truth enough to cause Michael some emotional pain, which seems to be her main goal…for now.

It looks like we’re in for an exciting week! Stay tuned to the ABC soap and don’t forget to check CDL often for the latest General Hospital spoilers, updates, and news.