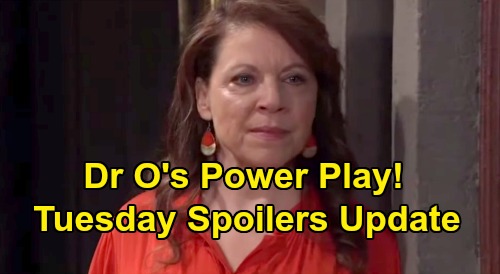 General Hospital (GH) spoilers update for Tuesday, July 30, tease that it’ll be a tough day for Lulu Falconeri (Emme Rylan). She’ll take some personal time as she tries to figure out her next move. It’ll be difficult to leave Dante Falconeri (Dominic Zamprogna) in the past, but Lulu’s starting to see that may be the only option.

At Pentonville, Ava Jerome (Maura West) will shut down Ryan Chamberlain’s (Jon Lindstrom) attempts to flirt. He’ll think they’ve still got a connection, but Ava won’t agree. Ryan may feel like Ava’s just in denial, but he’ll suggest she should cut to the chase if that’s the way she wants it. He’ll wonder about the reason for this little visit.

Ava will explain her efforts to seek Kiki Jerome’s (Hayley Erin) forgiveness and let her soul be put to rest. She’ll believe Ryan’s remorse would help, but he’s never sorry for the destruction he causes. Ryan won’t be able to offer Ava assistance, so she’ll be on her own as she tries to make amends with Kiki.

Meanwhile, Shiloh Archer’s (Coby Ryan McLaughlin) confidence will bother Jason Morgan (Steve Burton). Jason will feel like Shiloh may be planning something, so he’ll try to scare him off on Tuesday. General Hospital spoilers say Jason will want his family left alone. He’ll make it clear that Shiloh should keep his distance, but Shiloh typically doesn’t take orders from Jason or anyone else.

Across town, Drew Cain (Billy Miller) will stun Kim Nero (Tamara Braun) with some sweet news. After a mysterious package arrived with Drew’s name on it, he was surprised to learn Oscar was behind it. Oscar made sure Drew got his medals from his time in the Navy SEALs, so it really touched his heart.

General Hospital spoilers say Kim will be moved by their son’s gesture as well. Drew will note that Oscar’s last gift to him was a piece of his past. It’s obvious that Oscar wanted Drew to dig deeper, so this could be the catalyst for Drew’s curiosity. GH fans can expect some interesting details to come out in the coming weeks.

Until then, we can watch Valentin Cassadine (James Patrick Stuart) and Sasha Gilmore (Sofia Mattsson) tackle a problem. Sasha will grow increasingly concerned about Liesl Obrecht (Kathleen Gati), so she’ll ask Valentin what the plan is. She’ll want to make sure Liesl’s mouth stays shut for Nina Reeves’ (Cynthia Watros) sake as well as the sake of her own romance.

Liesl will listen in on Valentin and Sasha’s conversation, so she’ll be privy to whatever they’re cooking up. She might waltz over and remind them she’s not to be messed with. Liesl will likely point out her knowledge gives her a great deal of power, so they’d be wise to respect it and keep her happy.

Over with Jordan Ashford (Briana Nicole Henry) and Curtis Ashford (Donnell Turner), they’ll shock Stella Henry (Vernee Watson) with updates on the relative that turned up. A DNA search pointed to someone in Stella’s family, and further research suggests that person has a much closer link than they thought.

Stella will lash out when she’s seemingly accused of having a lovechild. She’ll insist that’s not the case, but Curtis and Jordan will look skeptical. Is Stella being honest or does she have a buried secret? General Hospital spoilers say some excitement’s coming up no matter what!

It looks like another terrific episode’s on the way. We’ll keep you posted as other GH details emerge. Stick with the ABC soap and don’t forget to check CDL often for the latest General Hospital spoilers, updates and news.