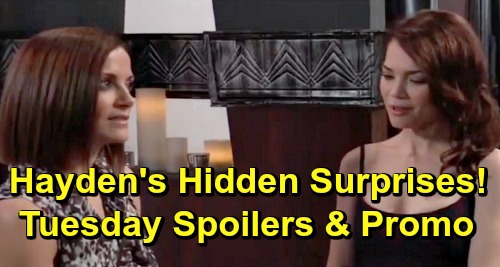 General Hospital (GH) spoilers for Tuesday, July 9, tease that Maxie Jones (Kirsten Storms) will rev up her mission. She’ll tell Peter August (Wes Ramsey) she’s not taking no for an answer this time. This undoubtedly ties in with Maxie’s plan to bring Dante Falconeri (Dominic Zamprogna) home. She’ll be willing to do whatever it takes to reunite Dante and Lulu Falconeri (Emme Rylan), but disaster will strike soon enough.

In the meantime, Elizabeth Baldwin (Rebecca Herbst) will react to Hayden Barnes’ (Rebecca Budig) shocking arrival. Once hugs are exchanged, GH spoilers say they’ll take a moment to catch up. Hayden will also chat with Curtis Ashford (Donnell Turner), who’ll be happy to see she’s not running from her past anymore.

Of course, things will take an uncomfortable turn once Hayden hears the latest happenings in Port Charles. Liz will suggest there’s a lot more going on than meets the eye. That’s true for Hayden as well since she’s keeping a child under wraps. Hamilton Finn (Michael Easton) will remain in the dark for now, but he’ll at least talk to Hayden on Tuesday and perhaps battle some complicated feelings.

Other General Hospital spoilers say Kim Nero (Tamara Braun) will work fast! She’ll take drugged Drew Cain (Billy Miller) to a private room and push him onto the bed. Kim will suggest Drew should just sit back and let her take care of everything, so it’s pretty easy to see where she’s going with this. She desperately wants a baby and would do just about anything to get one.

Fortunately, it doesn’t look like Kim will do THAT! Although it appears Kim’s planning on raping Drew, General Hospital spoilers reveal he’ll offer forgiveness on Tuesday. That may mean Kim will back out at the last second and apologize for going this far. It’s possible Drew will forgive Kim after the deed is done, but it seems like he’d be pretty outraged if anything actually happened.

We should mention that a stunned Julian Jerome (William deVry) will approach someone and wonder what’s going on. Will Julian will walk in on Kim and Drew in a compromising position? He might be the one who stops Kim from making a horrible mistake.

Next, Ava Jerome (Maura West) will flip out after her psychic loses contact with Kiki Jerome (Hayley Erin). Sibley Gamble (Veronica Cartwright) won’t be able to feel Kiki’s presence anymore, so Ava will be beside herself. She’ll insist they’re not going anywhere until Sibley brings her daughter back.

Alas, Sibley already admitted she can’t control these communications. Ava may be out of luck for now, but Sibley’s run isn’t over just yet. Maybe there’ll be some other tactics they can try later. Over with Valentin Cassadine (James Patrick Stuart), he’ll get grilled by a suspicious Nina Reeves (Cynthia Watros). She’ll wonder where Valentin’s been, but he’ll surely have some plausible excuse.

However, Valentin may not give Nina the truth. Liesl Obrecht (Kathleen Gati) was just pushed overboard, so Valentin is certainly a suspect. Brad Cooper (Parry Shen) is one as well, so it’ll be interesting to see how this storyline plays out.

As for Liesl, she’ll get some help after the teens notice her in the water below. Cameron Webber (William Lipton), Trina Robinson (Sydney Mikayla) and Josslyn Jacks (Eden McCoy) will do their part to make sure Liesl gets assistance ASAP. We’ll give you updates as other GH news comes in. Stick with the ABC soap and don’t forget to check CDL often for the latest General Hospital spoilers, updates and news.