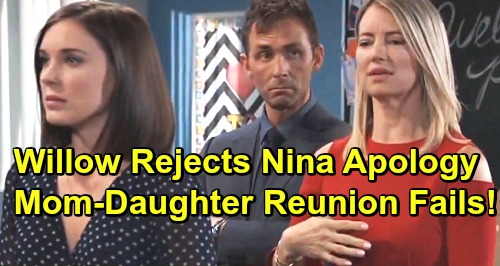 General Hospital (GH) spoilers tease that Nina Reeves (Cynthia Watros) will set out to apologize. She’ll try to tell someone she’s sorry on July 18, but the wording here may offer a big hint.

Whenever you see the word “try” in spoiler, it usually means that character will fail miserably. There’s a good chance Nina’s apology plan will only make matters worse.

Although GH hasn’t revealed the recipient of this apology, Nina clearly owes Willow Tait (Katelyn MacMullen) one. Willow had a legitimate reason to take off after supporting the kids at their end-of-the-year ceremony. The fact that Willow even showed up at all was a sign of real dedication to the children. She needed to be in court, but she didn’t want to bail on the students she’d bonded with.

Naturally, Nina had to chime in with insults and false assumptions as usual. She even had something to say about Willow giving Charlotte Cassadine (Scarlett Fernandez) the kindness award. It was obviously an effort to reward Charlotte for changing her behavior this year. Nina saw it as a possible dig at Charlotte and suggested her grades should’ve been celebrated instead.

All of this is because Nina’s had it in for Willow from the get-go. They got off on the wrong foot and never recovered. However, General Hospital spoilers say Nina may change her tune once she hears some Shiloh Archer (Coby Ryan McLaughlin) details. She may realize she was wrong to judge Willow for giving her baby up for adoption.

Likewise, Nina may connect with Willow’s story once the truth comes out about her dead baby. GH fans know Nina thought her child didn’t survive for many years. She knows a little about the pain Willow will be facing. That may cause Nina to reach out, apologize and offer some form of comfort.

Nina Reeves May Need To Grovel Before She Is Forgiven

Unfortunately, Willow’s probably not going to be in a very receptive place. She may lash out at Nina since she’ll be in such an emotional state. Since Willow is most likely Nina’s biological daughter, General Hospital isn’t going to make them bond too much yet. The conflict needs to get worse before it gets better. Nina needs to grovel once everything’s out in the open. Willow should make her work for it!

Of course, we have to ask how you’re feeling about this new Nina-Willow dynamic. Have things changed for you since Michelle Stafford’s departure? Cynthia Watros is a fine actress, but Stafford’s distinctive acting style was perhaps what made Nina…Nina. Watros arguably feels more like a new character at this point, so the jury’s still out on how this mother-daughter drama will shape up.

You know what, @gatitweets? Can @watroswatros and I just once have our picture taken without you stealing it? pic.twitter.com/hTJiXEYykq