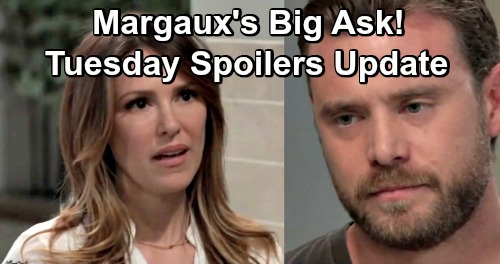 General Hospital (GH) spoilers update for Tuesday, June 18, tease that Sonny Corinthos (Maurice Benard) will have a problem on his hands. He’ll fill someone else in on the crisis, so maybe it’ll be Jason Morgan (Steve Burton) who gets the scoop. If this is about Shiloh Archer’s (Coby Ryan McLaughlin) takedown, you can bet Jason will work to resolve the issue ASAP.

Meanwhile, Josslyn Jacks (Eden McCoy) will feel anxious. Perhaps she’ll hear another noise and sense that someone’s watching her. Since Joss recently tried to contact Oscar Nero Quartermaine (Garren Stitt), so she may think he’s got a message to pass along.

At the same time, there could be a strange vibe to all this. Josslyn will be a mess regardless, so Carly Corinthos (Laura Wright) will try to help. She’ll hope to get her daughter into counseling, so we’ll see if Joss puts up a fight.

At GH, Margaux Dawson (Elizabeth Hendrickson) will track down Drew Cain (Billy Miller) and suggest there’s something she needs from him and it looks like a big ask. How will Drew respond to Margaux’s request? These two are on pretty good terms these days, so Drew may grant her wish. As long as it’s not something Drew’s vehemently against, there’s no reason why he shouldn’t help Margaux out.

That’s especially true if this involves Shiloh and the plan to destroy him. Drew could be in the prime position to do that thanks to his past with the cult leader. GH has some interesting angles to pursue if the choose to take advantage of them. Over with Kim Nero (Tamara Braun), she’ll repeat her desire for a baby and even resort to begging. Kim will desperately hope Julian Jerome (William deVry) gets on board.

Julian will contend that it could be the best thing that ever happened to him, so “it” could mean having a family with Kim. Even so, there’s no way Julian will think this is the right call. Kim is stuck in so much grief that she doesn’t know what to do with herself. This isn’t the time to make choices about bringing new life into the world.

Despite his reservations, Peter August (Wes Ramsey) is already prepared to pitch in. Maxie will also want Mac Scorpio (John J. York) and Felicia Scorpio (Kristina Wagner) to back her up on this. She’ll score a clue that could lead her to Dante, so she’ll need all the help she can get.

While Maxie focuses on her risky mission, Lulu will tell someone she’s “exactly that kind of woman.” General Hospital spoilers say Lulu will misinterpret a few things on Tuesday, so this could relate to her story for The Invader. Mac will express great concern about that story during a chat with Peter. He’ll wonder why Peter would let Lulu do something so dangerous.

Mac won’t be sure he can trust Peter to keep Maxie safe either. Peril is always just around the corner in Port Charles, so Mac will need to know he can count on Peter. It sounds like some exciting scenes are coming up. We’ll give you updates as other GH news emerges. Stick with the ABC soap and don’t forget to check CDL often for the latest General Hospital spoilers, updates and news.