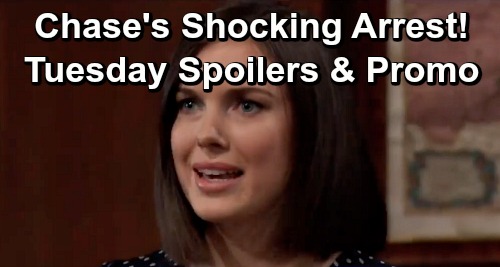 General Hospital (GH) spoilers for Tuesday, June 25, tease that Drew Cain (Billy Miller) will join Kim Nero (Tamara Braun) for dinner, but she’ll hope for more than that. They’ll get their wires crossed as they talk about the son they’ve lost. Kim will want Drew to help her keep Oscar Nero Quartermaine (Garren Stitt) alive. It appears he’ll be on board with that plan, but only because he doesn’t know how Kim intends to achieve it.

Kim will eventually kiss Drew and count on him to make another baby with her. However, Drew will shut down that idea later this week, June 24-28. Like Julian Jerome (William deVry), Drew will get that this isn’t the right time for Kim to be making a major decision. She needs to sort through her grief first, but Kim will drag her feet on truly processing the loss.

Other General Hospital spoilers say Bobbie Spencer (Jacklyn Zeman) will continue her tirade. She just showed up to rant at Julian, which resulted in a soapy slap. Now Bobbie will make it clear just how much damage was done. She’ll insist Julian may have lost “Wiley Cooper-Jones” for all of them.

Julian was just trying to help, but his scheme could be on the verge of falling apart. Now that Willow Tait (Katelyn MacMullen) has been ordered to hand over all info regarding the child she gave up for adoption, big trouble’s brewing. While Bobbie collapses under the pressure of the situation, Willow will have a courtroom outburst. Tuesday’s preview video shows Willow declaring, “You want me to say it? I’ll say it!”

However, it seems Willow may refuse to divulge the info she’s been asked to give. GH spoilers say Harrison Chase (Josh Swickard) will make a surprising arrest on Tuesday – and he happens to be right there behind Willow. Will Chase have to arrest his girlfriend once she’s held in contempt of court? It looks like things are headed in that unfortunate direction!

Over with Cameron Webber (William Lipton), he’ll find Josslyn Jacks (Eden McCoy) chatting with Dev (Ashton Arbab). Cam will want the scoop since he heard about the robbery, so Joss may explain that it was a misunderstanding. Will she also sell Cameron the story about Sonny Corinthos’ (Maurice Benard) cousin visiting them? Will Josslyn let Cam in on the secret and swear him to secrecy instead?

Regardless, Cameron’s in for a shock. While he deals with Josslyn’s news, Sonny will think he’s found a way for Dev to stick around. He’ll talk to Carly Corinthos (Laura Wright) about it and hope Dev won’t have to live in fear during his time in Port Charles.

Over with Jason Morgan (Steve Burton), he’ll tell someone he’s not going to let anything happen to him or her. Jason will likely be helping Michael Corinthos (Chad Duell) pry details out of Carol Lockhart. They’ll hope to score as much dirt as possible on Shiloh Archer (Coby Ryan McLaughlin) without putting Carol in danger.