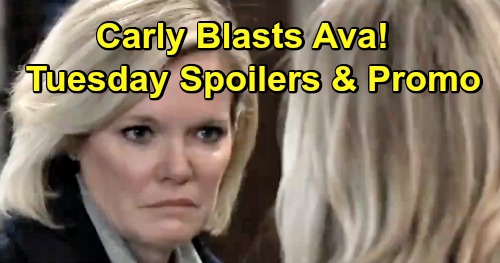 General Hospital (GH) spoilers for Tuesday, March 19, tease that Elizabeth Webber (Rebecca Herbst) will remain torn over Franco Baldwin’s (Roger Howarth) actions. She’s certainly relieved to know Franco is innocent and can understand why he teamed up with Jordan Ashford (Briana Nicole Henry). However, Liz can’t seem to get past all the lies. Their relationship is clearly in a fragile state.

At GH, Liz will tell Franco that she knows what she wants to say. She just won’t be sure she can actually say it. Liz will undoubtedly face a war between her head and her heart. Her brain will tell her to run in the opposite direction, but her heart will want to let Franco back in her life. General Hospital spoilers hint that Liz’s head may win out for now, but Franco won’t give up on their future together.

Over with Julian Jerome (William deVry), he’ll worry about Dr. Kim Nero (Tamara Braun). She’ll be distraught over Oscar Nero’s (Garren Stitt) condition, so Julian will want to help. He can’t change the fact that Oscar has a brain tumor, but he can offer comfort while his family endures this nightmare. That’s why Julian will put together a little care package and send it Kim’s way.

Meanwhile, Drew Cain (Billy Miller) will learn that Oscar’s latest test results are in. He’ll come together with Kim to hear them by Oscar’s bedside. Dr. Terry Randolph (Cassandra James) will ultimately reveal that the tumor has grown, which isn’t surprising since Oscar had his worst seizure yet.

General Hospital spoilers say Oscar will want to know how much time he has left, but he’s not going to like the answer. He’ll need the help of his loved ones as he prepares for this last chapter of his life. Also at GH, Anna Devane (Finola Hughes) will play hardball with Alex Devane Marick (Finola Hughes). She’ll insist that if her sister doesn’t confess which memories were transferred, Alex won’t get the cure.

When pressed, Alex will recall an old mission that she botched terribly. Once Anna hears the details, she’ll realize she’s been haunted by a failure that was never her own. Alex won’t offer much else until later, but you can count on a clue about Peter August (Wes Ramsey) before this short stint wraps up. It won’t be long until Anna determines that Peter may be Alex’s son, not hers.

Next, General Hospital spoilers say Ava Jerome (Maura West) will be a real mess. Thankfully, Carly Corinthos (Laura Wright) will try to talk some sense into Ava. She’ll know her enemy’s been through a lot, but she’ll think Ava needs to pull herself together and step up – most likely for Avery Corinthos’ (Ava and Grace Scarola) sake. It appears Julian may get a call about Ava and give her some tough love, too.

In Turkey, Sonny Corinthos (Maurice Benard) will push Dante Falconeri (Dominic Zamprogna) to trust him. Since Sonny’s arrival screwed up Dante’s plan, they need a new one. Dante can’t leave Sonny to die, so Sonny’s got an idea on how to fix that. He suggested Dante should kill him before Raj Patel (Noshir Dalal) has the chance.

Of course, Sonny’s talking about a faked death here. He’ll think Dante should pretend to take him out so they can both get home, but this plot sounds awfully dangerous! We’ll give you updates as other GH news comes in. Stay tuned to the ABC soap and don’t forget to check CDL often for the latest General Hospital spoilers, updates and news.