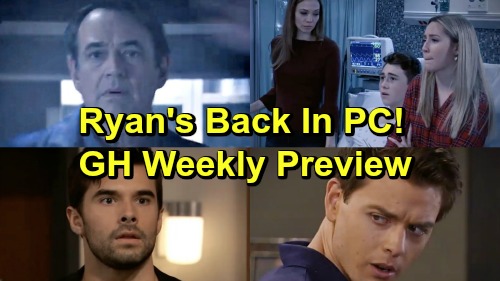 General Hospital (GH) spoilers tease in a new promo video for the week of March 18-22 that Dante Falconeri (Dominic Zamprogna) certainly returns, and so does Ryan Chamberlain (Jon Lindstrom), or so it appears!

First, however, Oscar Nero (Garren Lake Stitt) and his family, and girlfriend Josslyn Jacks (Eden McCoy) get some very bad news from Dr. Terry Randolph (Cassandra James). Terry says his tumor has grown, and he asks how much time he has. Everyone looks sad and worried, and with good reason. Will General Hospital viewers be seeing Oscar much longer?

Next we see what appears to be Dr. Kevin Collins entering into a dimly lit room and he’s knocked out by someone coming out of the darkness. Is it Ryan Chamberlain, or is it someone else who thinks Kevin is Ryan Chamberlain? It’s not likely that someone is mistaking Kevin for Ryan since his presumed death was pretty well publicized.

General Hospital viewers know what it means when no body is found, even if the ‘dead’ person’s return usually doesn’t happen this quickly! Is Ryan taking over Kevin’s life again? GH buzz says Ryan knocks out Kevin and impersonates him once more.

Detective Harrison Chase (Josh Swickard) looks like he’s coming into Willow Tait’s (Katelyn MacMullen) classroom and sees something shocking -are those Willow’s feet we see standing in front of what looks like broken glass and water on the floor – or are they Harmony’s (Inga Cadranel) who has come after Willow, doing the bidding of her master Shiloh (Coby Ryan McLaughlin)?

Most likely it’s actually Shiloh himself who terrifies Willow causing her to drop the glass. Does Shiloh want just Willow, or her baby too? If he wants her baby, that could be a big problem.

Elizabeth Webber Baldwin, (Rebecca Herbst) Michael Corinthos, (Chad Duell) Dr. Griffin Munro, (Matt Cohen) and Lulu Falconeri (Emme Rylan) all turn their heads and look at something that definitely puts them on edge! Could they all be thinking, “Is he – or isn’t he – Dr. Kevin Collins?” Only his fingerprints can tell for sure!

Meanwhile, back in Ankara, Turkey, Dante stands with his gun drawn as Raj Patel (Noshir Dalal) commands him to shoot his father, Sonny Corinthos (Maurice Benard); Sonny asks Dante, “What’re you doing?!” Dante responds, “I’m getting everything I want!” Will Dante shoot to kill Sonny, or convince Raj he’s worth more alive? GH spoilers indicate the latter so expect Sonny to pretend to join Raj’s squad.